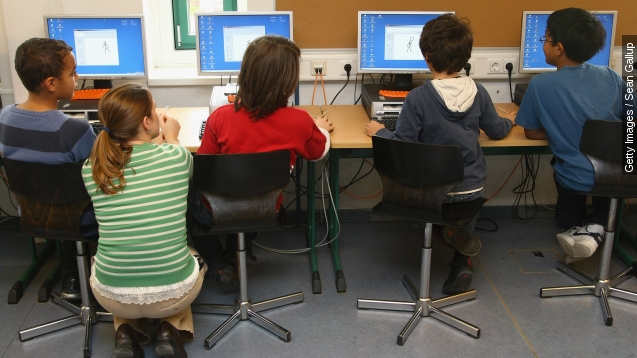 SMS
Computer Use Might Be Hurting Students' Reading Skills
By Katherine Biek
By Katherine Biek
September 16, 2015
Technology in the classroom could be hurting students' proficiency in reading and math, according to a new study.
SHOW TRANSCRIPT

As schools around the world add more and more computers to classrooms, a new report says using that technology may be hurting students' reading levels.

The Organization of Economic Cooperation and Development, or OECD, looked at classrooms in more than 30 countries.

It found computer use in the classroom had mixed effects on student performance. Most notably, students who frequently used computers didn't test well in reading.

The use of computers every day was even found to hinder digital reading comprehension.

Based on the findings, it seems students who used computers less than average, tested the highest in both print and online reading comprehension.

A writer for The Washington Post summed it up nicely: "The time kids are spending getting acquainted with computers is time they aren't spending honing their reading skills."

And using computers to teach students math also seemed to ding their scores in that area.

This OECD report comes after years of teachers and administrators promoting technology in the classroom, including a teacher in Maryland who found it helped boost AP calculus test scores for her students, compared with the previous year when her lessons didn't use technology.

But OECD's findings might have more to do with how students use their computers.

The Wall Street Journal spoke with a director at the State Educational Technology Directors Association who said technology in the classroom won't have much of an effect on education if students don't know how to properly use that tech.

OECD did say schools should train teachers how to use technology in the classroom so they can pass on that knowledge to their students.