Communities Across The Nation Mourn Victims Of Orlando Shooting 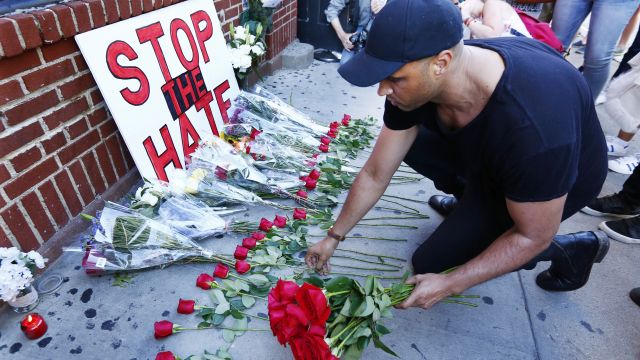 SMS
Communities Across The Nation Mourn Victims Of Orlando Shooting
By Katie Link
By Katie Link
June 12, 2016
Outside the Stonewall Inn in New York City, 50 roses lie on the ground — one for each deceased victim.
SHOW TRANSCRIPT

Communities across the nation are mourning after a gunman opened fire inside an Orlando nightclub killing 50 and injuring dozens more.

On Sunday night, as the names of deceased victims were being released, memorials grew across the nation.

Hundreds of people gathered at the birthplace of the gay rights movement — the Stonewall Inn in New York City — where 50 roses lie on the ground.

LGBTQ pride celebrations in cities like Philadelphia, Washington, D.C., and Los Angeles went on as planned but with heightened security and purpose.

The 70th Annual Tony Awards was dedicated to the victims. Host James Corden opened the show, saying, "Your tragedy is our tragedy. Theater is a place where every race, creed, sexuality and gender is equal, is embraced and is loved. Hate will never win."

In Orlando, mourners attended church services as city officials urged people to delay vigils and give law enforcement time to continue their investigation.