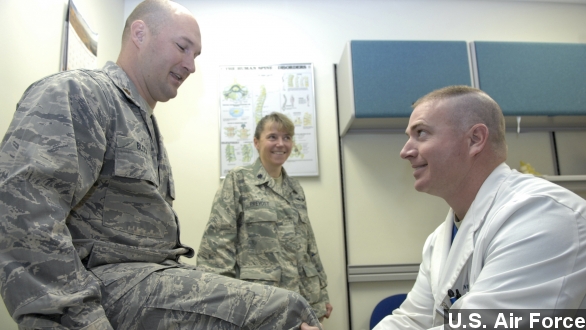 A special commission on military benefits just released some pretty big recommendations to reduce personnel costs in the armed services.

Right up top, though, we should point out that even if any of these changes happen, they wouldn't apply to current service members, unless they decide to opt in. That said, one of the main takeaways is a recommended change to the military retirement plan. (Video via U.S. Marine Corps)

Now, the report recommends a 401(k)-style account for all troops, even those who leave the service early. (Video via U.S. Army National Guard)

The move would decrease the size of pensions, but make up for that through the savings plan. (Video via U.S. National Guard)

Not everyone is confident those changes will make it past congress. (Video via C-SPAN)

“I think that’s gonna be a pretty high hurdle to be very candid. The pension program is pretty well established and I think it’s gonna be hard to make changes to that,” said Rep. Charles Dent.

The commission also recommends replacing the military's current health care system — Tricare — with a health care allowance for troops. This would allow troops to choose from commercial insurance plans. (Video via Tricare)

Education benefits would also change under the new recommendations. The commission suggests getting rid of the Montgomery GI Bill in favor of the Post-9/11 GI Bill to reduce redundancy. (Video via U.S. Army)

The report claims the recommendations could save the government as much as $31.8 billion from 2016-2020.

Any changes would still need Congress’ blessing, but the report will be the basis for dialogue about military compensation. (Video via U.S. Army)

“We’re gonna need your input as to whether those are doable, the effect on the military, on the all volunteer force, on our retirees,” said John McCain.

Next week, the House and Senate Armed Services committees will hold hearings with members of the committee that is recommending these changes.

This video includes an image from David B. Gleason / CC BY-SA 2.0.