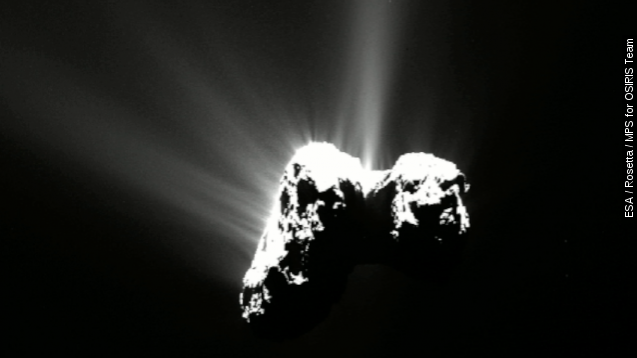 SMS
Cometary Oxygen Is Good News, Bad News For Alien Life
By Evan Thomas
By Evan Thomas
October 31, 2015
Researchers have discovered molecular oxygen on comet 67P/C-G, but it's not making the search for extraterrestrial life any clearer.
SHOW TRANSCRIPT

Scientists have discovered the unexpected on comet 67P/C-G: molecular oxygen.

The presence of this oxygen could increase the odds of finding extraterrestrial life as we might recognize it — but its very existence could also poke holes in those same theories. This is harder than it looks. (Video via European Space Agency)

As recently as last year, finding methane and oxygen together was thought to be a reliable biosignature — a good indicator that biological activity could happen or is happening.

But scientists haven't found any such activity on 67P. "On the comet, we have both methane and O2, but we don’t have life. So it’s probably not a very good biosignature," one scientist told Discovery News.

And if there are other comets that harbor oxygen the way 67P does, they could be messing with our search for life on other planets.

A writer at Discovery News proposes these cometary emissions might confound the sensitive spectrometry scans we run on exoplanets. (Video via NASA)

If a comet gets close enough to a planet to influence its atmosphere, its gases could send back false positives. (Video via NASA)

We saw how this works firsthand in 2014, when comet Siding Spring passed Mars and scattered enough dust in its ionosphere to change its UV signature. (Video via NASA)

So what is this oxygen good for? It might not point to extraterrestrial life, but it is still a valuable history lesson.

67P's oxygen had to come from somewhere, and ESA scientists say it could offer new clues to the conditions during the formation of the solar system. (Video via NASA)