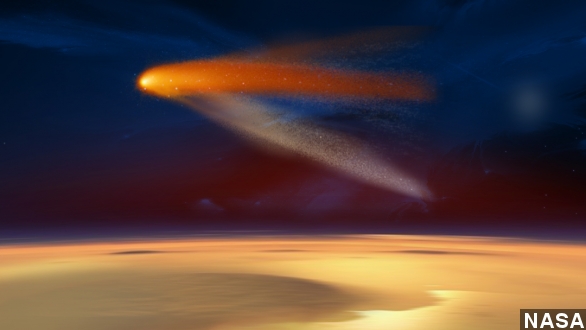 By Matt Picht
October 19, 2014
A comet from the farthest reaches of the solar system passed extremely close to Mars this weekend, giving astronomers a rare opportunity to study it.
SHOW TRANSCRIPT

It's something that only happens once in a million years — a comet from the outer regions of the solar system flew extremely close to Mars this weekend, giving scientists an unprecedented opportunity to observe it.

Comet Siding Spring, named for the Australian observatory which spotted it, is a frozen chunk of rock from the Oort Cloud which surrounds the solar system. It's barreling through our solar system at about 125,000 miles per hour, and came within 87,000 miles of the surface of Mars — a hair's breadth away in astronomical terms.

Here's the exact moment Siding Spring — the grey smudge on screen — hit its closest point to Mars, which is the bright light in the center. Not very visually exciting, is it?

The real excitement from this event unfolds over the next few days. Space agencies around the world have orbiters stationed around Mars, and the data they've gathered from Siding Spring could give astronomers valuable information from billions of years in the past.

DR. MICHELLE THALLER VIA SPACE.COM: "It's literally five billion years old, and its coming in for the first time. Analyzing the comet will give us clues about how the planets formed. We actually even think that comets have some of the building blocks of life on them."

Siding Spring's approach did also put the Mars robots at some risk. There wasn't any real chance of a direct collision, but the trail of dust and debris emitting at high speeds from the comet could have damaged one of the orbiters.

NASA prepared for that possibility by maneuvering its orbiters to the other side of the planet during the moment of Siding Spring's closest approach. So far, the agency hasn't reported any damage from the comet.

Siding Spring's orbit reaches its closest point to the Sun on Oct. 25, six days after its close shave with Mars. From there, the comet heads back to the outer reaches of the solar system. It should be back within the next 1 million years or so.