Comet-Chasing Spacecraft Wakes Up After 2 Years 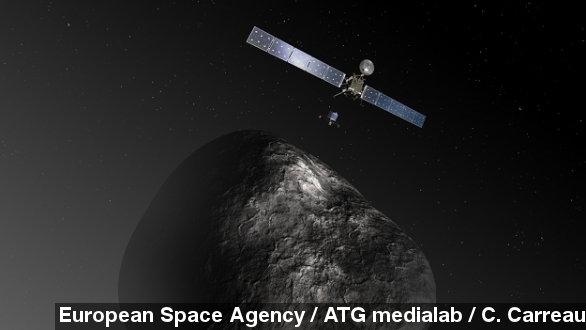 SMS
Comet-Chasing Spacecraft Wakes Up After 2 Years
By Steven Sparkman
By Steven Sparkman
January 20, 2014
After a tense wait, scientists got the signal that Rosetta had woken up after 31 months in hibernation. It's set to land on a comet by November.
SHOW TRANSCRIPT

What does it take to make 200 scientists and engineers cheer and hug one another? Try bringing a billion-dollar spacecraft near the end of their agency's most ambitious mission back online after two and a half years in hibernation.

Scientists at the European Space Agency's headquarters in Darmstadt, Germany, successfully woke up the Rosetta spacecraft from a 31-month snooze Monday.

The word scientists and journalists used to describe the scene was "tense." It took almost an hour longer than expected for Rosetta to send a signal back to Earth. (Via Twitter / @mggtTaylor, @DrStuClark, @ESA_Rosetta)

But everything seems to be going well so far. There will be plenty of testing in the coming days to make sure all the spacecraft's systems are still working, and then it's on to the main goal of the mission: chasing down and actually landing on a comet.

Launched in 2004, Rosetta examined two asteroids before being put to sleep in 2011. The long nap helped it conserve power as it waited for the opportunity to reach its target. (Via Space.com)

That target: a comet 2.5 miles in diameter. The spacecraft is scheduled to reach the comet this May, studying it and mapping its surface before sending down a lander in November. (Via European Space Agency)

"We've had previous missions to comets. They've just been flybys taking snapshots at hundreds of kilometers away. Rosetta's going to get up close and personal with the comet." (Via BBC)

Studying a comet's icy core has been a goal of the astronomical community for decades. It's thought comets could help shed light on the formation of the solar system.