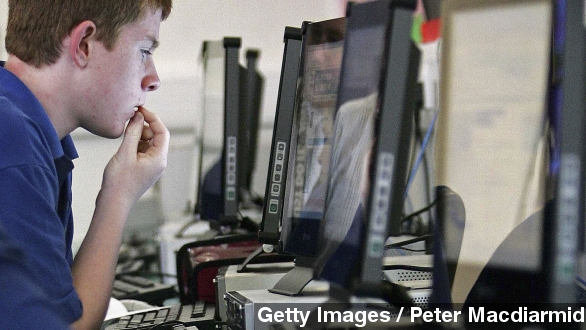 SMS
".com" Turns 30, But Will It Survive Much Longer?
By Jasmine Bailey
By Jasmine Bailey
March 15, 2015
Sunday was the 30th anniversary of the .com web domain, which was created in 1985. But with hundreds of new domains like .sucks, will .com last?
SHOW TRANSCRIPT

Have you ever thought about where the .com domain comes from or why we even use it? Yeah me neither, really.

But on account of Sunday being the 30th birthday of the all too familiar .com — lets add another piece of random knowledge to that noggin, shall we?

CNN Money posted this video, "Converging technology may turn us into a nation of stay at home, shop at home couch potatoes. ... That's right, the Roman Catholic Church has a homepage on the World Wide Web."

​This is Symbolics.com and it was the first ever website with a .com domain — created March 15, 1985, even before the World Wide Web came about in 1991. As you can see, the site still lives. Its founder admits, "For me, personally, I am excited (and honored) to hold the first .com ever registered. ... Out of approximately 275,000,000 domain names in existence ... approximately 120 million are of the .com extension."

VeriSign, which sells domain names, made this nifty graph to give a little context. After .com came about it took almost ten years before there were over 100 other .coms on the Internet — which makes sense, because, you know, there was no internet available to the pubic until 1991.

So why .com? Verisign talked to Jack Haverty, an Internet pioneer at MIT who noted theres's not really a clear reason behind the decision. Saying, "I think .COM originally was derived from 'company' rather than 'commercial.' The .COM's weren't thought of as 'businesses' in the sense of places that consumers go to buy things."

But as .com gets one year older, it seems to be fading quickly — being pushed aside for other domains.

CNN reports, ".com now getting a bunch of different neighbors. ... Try .pizza, .dating, .beer, and even .baby. ... The idea is that the current market is really saturated. ... It's really hard to get a good domain name."

There are concerns that all the new .whatevers could get a little confusing. After all, more than 500 so-called, generic top-level domains, have been approved for use.

A consumer Advocate for .sucks said, "The word 'sucks' is now a protest word and it's up to people to give it more meaning."

Marketing Land brought up the possibility that people could register .sucks domains for businesses they don't like, giving those businesses a PR mess to deal with. But Andy Beal, CEO of the branding and reputation management agency Reputation Refinery, says .sucks, which goes live March 30th, is nothing to be worried about. "When was the last time you read about a negative domain causing a reputation issue for a company? A negative tweet, Yelp review, or blog post can do far more damage."

True that. Anyway, happy birthday, .com, Newsy.com wouldn't be here without you.