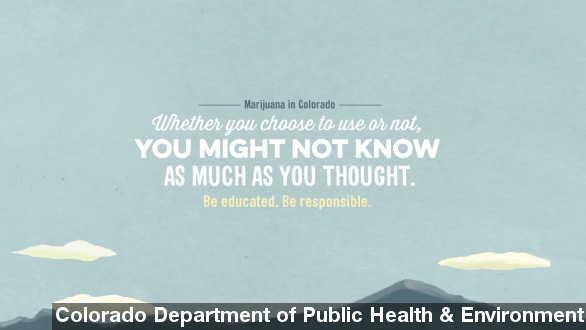 "These high school boys and girls are having a hop at the local soda fountain. Innocently they dance. Innocent of a new and deadly menace lurking behind closed doors — marijuana, the burning weed with its roots in hell." (Video via Motion Picture Ventures / "Reefer Madness")

That was considered marijuana education in the 1930s — and it's a far cry from Colorado's latest educational pot campaign launched this month.

The latest effort is called the "Good to Know" campaign, it uses a combination of rhyming quips and a bright color palette to tell Coloradans the laws regarding marijuana use. The campaign's price tag? $5.7 million.

But perhaps the high cost is worth it. As it turns out, not a whole lot of Colorado residents are aware of the fine print within the state's legalized marijuana laws. (Video via YouTube / Leafbuyer)

According to USA Today's Trevor Hughes, an early survey found just 27 percent of Coloradans knew it was illegal to smoke marijuana in public. Only 23 percent were aware it can only be sold to those 21 and older.

A writer for The Denver Post says the new ads are part of Colorado's broader attempts to dismantle pot stereotypes and educate people on safe marijuana use. (Video via YouTube / jayurbuzz)

This latest campaign reminds Coloradans it's illegal to take pot outside the state. Perhaps that particular point was prompted by some recent interstate drama between Colorado's neighbors to the east. (Video via YouTube / The HighwayMan)

In December, both Nebraska and Oklahoma filed a lawsuit with the U.S. Supreme Court over Colorado's marijuana legalization.

According to the lawsuit, both states say Colorado's legal pot is leading to problems within their own states by way of costing them taxpayer money for more marijuana-related arrests.

​But the lawsuit might not be that effective, as more states legalize marijuana in some form or another. Twenty-three states have done so already, with both Washington state and Alaska voting in favor of legalizing recreational use last year.