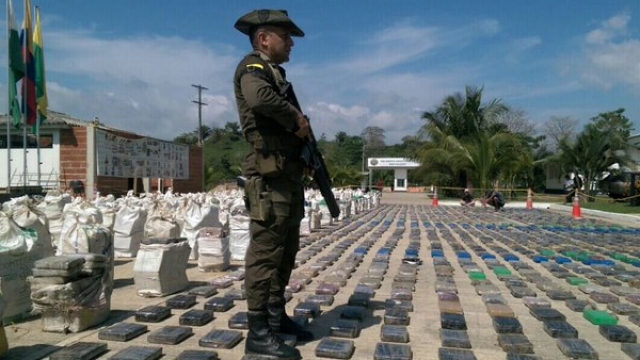 SMS
Colombia Seizes 17,500 Pounds Of Cocaine In Major Drug Bust
By Ryan Biek
By Ryan Biek
May 16, 2016
This was a big grab for authorities, and not just because of its size.
SHOW TRANSCRIPT

When commandos and Black Hawk helicopters raided a banana plantation in the northern region of the country, they bagged 8.8 tons — more than 17,500 pounds — of cocaine.

This was a big grab for authorities, and not just because of its size. The drugs belonged to the country's largest narcotrafficking group — Clan Úsuga — which smuggles large amounts of cocaine from Colombia to Central America, then to the U.S.

For Úsuga, the hits just keep on coming. Police snagged a ton and a half of their cocaine just two days before Sunday's raid and killed one of their leaders in March.

At least three people were arrested in the latest drug bust.

Correction: A previous version of this video called Sunday's drug seizure the biggest in Colombia's history, but Colombian police have made some even bigger seizures in the past. This video has been updated.