Colombia's Peace Deal Is In Pieces. So What Happens Next? 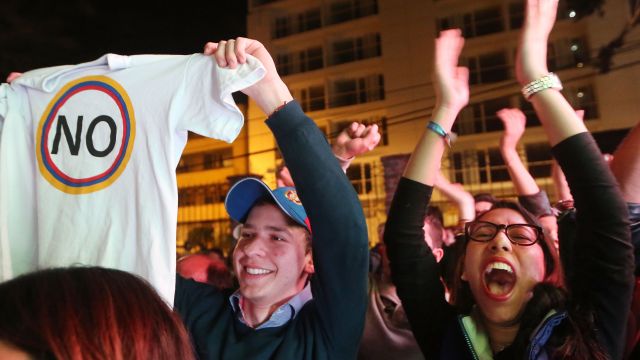 SMS
Colombia's Peace Deal Is In Pieces. So What Happens Next?
By Matt Picht
By Matt Picht
October 3, 2016
Despite the rejection of a peace agreement, both the rebels and the government say they're still committed to the peace process.
SHOW TRANSCRIPT

A "historic" peace deal to end Colombia's decades-long internal conflict has gone up in smoke. And no one's really sure what will happen next.

The peace agreement between the government and the FARC rebels had to pass a popular referendum in order to take effect. In a shocking result, 50.2 percent of voters opposed the deal. Turnout for the vote was also exceptionally low at 37 percent.

SEE MORE: Will Colombians In The US Vote In Favor Of A Peace Deal Back Home?

Colombia's Marxist rebel group, the Revolutionary Armed Forces of Colombia — FARC — has been battling the Colombian government for decades. The conflict has killed more than 220,000 and displaced nearly 7 million people.

This doesn't mean Colombia will be plunged back into war: A cease-fire deal between the government and the FARC is still in place. Leaders from both sides also pledged to keep working toward peace after the vote.

But this will almost certainly give those who campaigned against the vote a greater say in where the peace talks go from here.

That chiefly benefits former Colombian president Álvaro Uribe, who has campaigned heavily against an agreement he says is too lenient on FARC rebels. He told reporters after the vote that all Colombians wanted peace, but the current deal needed to be altered.