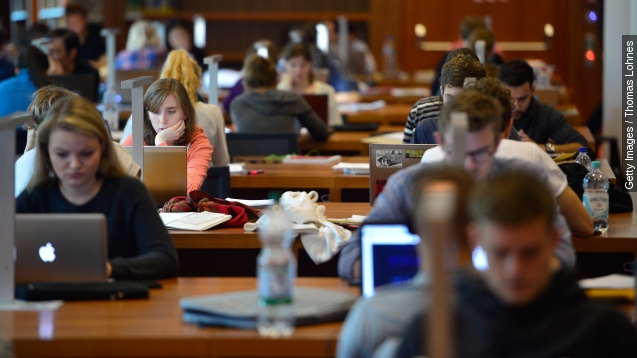 The U.S. Department of Education launched a new website on Saturday to make deciding on college easier for students.

But there's just one thing missing: the college ranking system the Obama administration has been talking about for the past two years.

Obama introduced the system in a speech he made at the University of Buffalo in 2013. He criticized the sky-rocketing cost of going to college and outlined a federal ranking system that would be tied to billions of dollars from federal student aid. ( Videos via University of Buffalo, Boston College)

"I am proposing major reforms that will shake up the current system. First, we are going to start rating colleges. What we want to do is rank them on who is offering the best value so students and taxpayers get a bigger bang for their buck," said President Barack Obama.

The system would judge schools on graduation and retention rates, the ability for students to pay back their college debt and how accessible a school was to low-income and first-generation students. (Video via Federal Student Aid)

And it wasn't very popular with college officials. Some voiced their concern that rating colleges would put money above academics.

But despite officials insisting time and time again that this rating system was going to happen, the ranking system was abandoned. Instead, we have a search tool filled with extensive education data.

"I say everywhere I go, we're going to do this with a huge sense of humility," said Secretary of Education Arne Duncan.

“There is an element to this conversation which is, ‘We hope to God you don’t do this.’ Our answer to that is: ‘This is happening," Cecilia Muñoz, Director of the Domestic Policy Council said.

"You’ll be able to see how much each school’s graduates earn, how much debt they graduate with, and what percentage of a school’s students can pay back their loans — which will help all of us see which schools do the best job of preparing America for success," said President Obama.

The website is a compilation of data from The Education Department and Department of the Treasury making it, as one Vox writer put it, a "trove of data."

"The goal is to help everybody who’s willing to work for a higher education search for and select a college that fits their goals," said President Barack Obama.