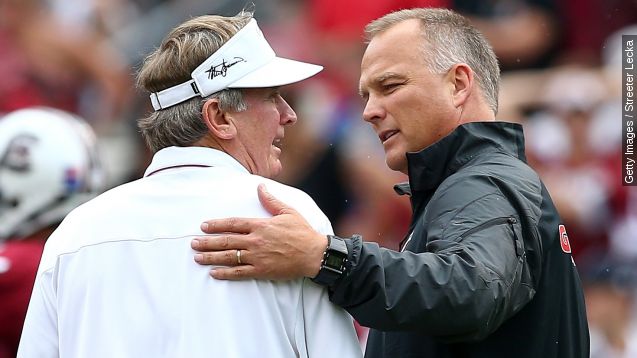 It's the end of the regular season for many college football teams, and that means, for some, the search for a new head coach is on.

Here are our rankings of the most attractive college coaching jobs still available.

Undoubtedly at the top of the list is the University of Southern California.

While it was cast into uncertainty with the mid-season firing of Steve Sarkisian this year, it's still a marquee program. (Video via KABC)

The athletic department is one of the richest in the nation, the school's got a prestigious football history and Southern California and its surrounding areas are rich with high school recruiting talent. USC hasn't had a losing season since 2000 and has a solid recruiting class coming in next year. (Video via USC)

Plus, pressure from fans and the university should be minimal for any coach willing to clean up the mess Sarkisian and former head coach Lane Kiffin left behind. A top-tier salary should also help the coaching search.

The Bulldogs reportedly cut ties with head coach Mark Richt after a 9-3 season. The Bulldogs are expected to go to their 19th straight bowl game and have a top-10 2016 recruiting class. Georgia's next head coach will have the pieces in place for success, but expectations are clearly high. (Video via University of Georgia)

After that, the next best job appears to be a jumble between South Carolina, Missouri and Miami (FL).

Arguably, Miami beats out the other two due to the possibility of immediate success. After dumping head coach Al Golden mid-season, the Hurricanes finished 8-4 on the season, and there are plenty of strong recruits in the state. (Video via University of Miami)

The biggest problem seems to be the program's rich football tradition, which might work against them. Fan support is at an all-time low right now. (Video via ESPN)

As for South Carolina and Missouri, fan support is extremely strong in both places, and both jobs are equally attractive.

Both programs play in the SEC East, which helps them avoid the wrath of Alabama every year, but both also had less-than-stellar seasons this year. Missouri finished 5-7 and South Carolina went 3-9.

South Carolina's turnaround could take a little while but could have a big payoff. The school has a history of attracting big-name coaches like Steve Spurrier and Lou Holtz, but neither the Gamecocks' offense nor defense showed much life this year. As for location, they hold a slight recruiting advantage over Missouri. (Video via University of South Carolina)

Missouri's immediate future looks a bit brighter. Head coach Gary Pinkel is stepping down after the season for health reasons but coached the Tigers to back-to-back SEC East titles in 2013 and 2014. Missouri's also had a top defense lately, and this year was no different, despite the poor record. (Video via University of Missouri)

But Missouri's offense needs an overhaul, and the racial tensions on-campus could make incoming recruits and potential head coaches wary.

Rounding out other top jobs are UCF, Maryland, Illinois, Syracuse and North Texas.