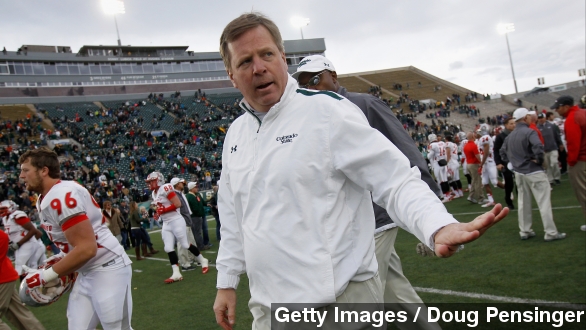 SMS
College Football Coaching Carousel: A Costly Dramedy
By Christian Bryant
By Christian Bryant
December 4, 2014
The hirings, firings and team-swapping of college football coaches has begun with the University of Florida at the center of the action.
SHOW TRANSCRIPT

College football is steeped in tradition — the inter- and cross-conference rivalries, the tailgating, the Saturdays when you actually have something to do. Fortunately for us, the traditions don’t stop there.

The annual post-season hirings, firings and team-swappings of football coaches — dubbed the coaching carousel — has begun.

Let’s start at the University of Florida, which seems to be the center of the most talked-about coaching pick up. Former Colorado State University Head Coach Jim McElwain will lead the Gators next season.

Early on, negotiations to get McElwain hit a snag because of his $7.5 million buyout. The buyout went from $7.5 to $7 million, but that isn’t as important as these facts:

- McElwain will have to pay $2 million to coach at Florida,

- The Gators are still on the hook for $6 million for former coach Will Muschamp,

- And McElwain’s base salary still hasn’t been announced.

But many sports analysts suspect the expense of hiring McElwain will be worth it because of his success as Alabama’s offensive coordinator.

“He really elevated that program when he went there in 2008. … McElwain had an unbelievable run at Alabama,” ESPN’s Paul Finebaum said.

Of course, for McElwain to get his job, somebody else had to lose theirs.

Will Muschamp has been pegged as one of the most sought after coaches in college football this year and has already reportedly received defensive coordinator offers from Auburn and Texas A&M. (Video via University of Florida)

Both offers are described as “lucrative.” Estimates range from $1.2 to $1.5 million, which would put him on par or above the highest paid coordinators in college football. AL.com reports Alabama’s Kirby Smart makes $1.35 million per year, just ahead of LSU’s John Chavis, who makes $1.3 million.

We’re sure McElwain is excited about being back in the Southeastern Conference, but his announcement and Muschamp's offers might've been upstaged by Philadelphia Eagles Head Coach Chip Kelly responding to rumors that he could be heading back to college — as Florida’s coach.

Reporter 1: “When that stuff comes up, Chip, how do you react?”

Reporter 2: “Is it flattering?”

Philadelphia Inquirer writer Jeff McLane added this from Kelly: “I don’t think our pro offense would work at the college level.” Tell us how you really feel, Chip.

The biggest shocker so far has been Nebraska’s hiring of Oregon State’s Mark Riley after the firing of Bo Pelini — which surprised many people because nothing had been leaked ahead of time.

“Normally, coaching hires like this are predictable. Names are kind of rumored a few weeks before the hiring becomes official,” KEZI's Jake Zivin said.

And, as USA Today reports, Riley and former coach Pelini “couldn’t be any more different. Pelini is brash, outspoken and never smiles, while Riley is friendly, has been described as the nicest man in college football — and smiles.”

According to the Corvallis Gazette Times, the buyout on Riley’s contract was $500,000. His salary was more than $1 million a year plus almost another half million dollars in compensation and performance-related bonuses.

One of the only other big coaching names to come up is San Francisco 49ers Head Coach Jim Harbaugh. He’s still the 49ers coach, but rumor has it he could be lured away by the the University of Michigan or another NFL team.