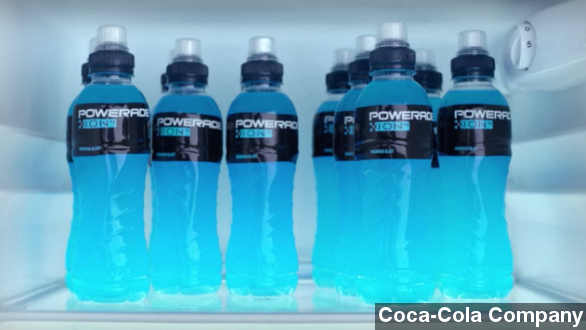 SMS
Coca-Cola Will Remove Flame Retardant Chemical From Drinks
By Kristian Mundahl
By Kristian Mundahl
May 5, 2014
The chemical, brominated vegetable oil, is used to keep flavoring oils in sports drinks distributed. It's also used as a flame retardant in furniture.
SHOW TRANSCRIPT

After an online petition gathered nearly 60,000 signatures, Coca-Cola said Monday it would remove brominated vegetable oil from its entire line of beverages. You might be familiar with the oil's less technical name: flame retardant.

According to Newsweek, brominated vegetable oil, or BVO, will be removed specifically from Coke’s Powerade drinks, along with Fanta and Fresca brands. Common in fruit drinks, the chemical also doubles as a flame retardant for upholstery and children’s products. (Via The New York Times)

So what’s it doing in soft drinks in the first place? The FDA describes the material as an additive ”used on an interim basis as a stabilizer for flavoring oils.” The San Diego Reader puts it like this, “without brominated vegetable oil, your favorite lemony-limy soda would look like the Gulf of Alaska in the wake of the Exxon-Valdez.”

And it’s that “interim” tag that’s crucial to BVO’s continued use. The oil was labeled “interim” by the FDA in 1977, designated for more studies on its safety, but has remained on that list to this day.

According to a 2012 report by The New York Times, don’t expect that label to change anytime soon. An FDA spokeswoman told the outlet that “Any change in the interim status of BVO would require an expenditure of FDA’s limited resources, which is not a public health protection priority for the agency at this time.”

That 2012 inquiry came after a Mississippi teenager prodded Pepsi into removing the chemical from its Gatorade flavors. Sarah Kavanagh, then 15, said she targeted Gatorade and Powerade because of their claims to healthful qualities. (Via Change.org)

And if you're wondering what risk BVO poses to the everyday soda drinker, the Atlanta Journal-Constitution says drinking excessive amounts of soda containing the chemical can result in headaches, memory loss and even hormonal disruption in extreme cases.

While small amounts of the chemical have no immediate effects, scientists have determined that the bromine stored in fatty tissues can accumulate and remain there even after changes in diet.

Regardless, Coke maintains that even with the removal, its BVO beverages are safe, saying in a statement “All of our beverages, including those with BVO, are safe and always have been—and comply with all regulations in the countries where they are sold.”

And despite the change by Pepsi in 2012, brominated vegetable oil can still be found in the company’s Mountain Dew and Squirt drinks.