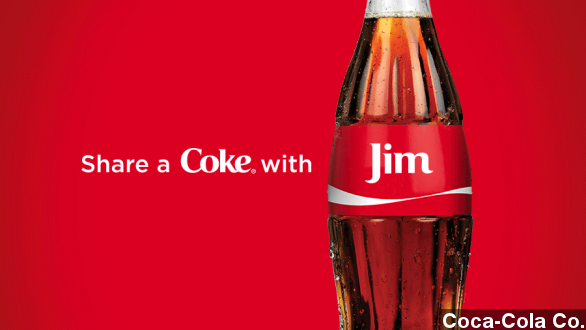 We've got a billion-dollar question for you: in a nation turning toward healthy dieting habits, how do you get more people to buy sugary soda?

It turns out someone's already answered that question — you just put people's names on the bottles and cans. (Video via Coca-Cola)

According to The Wall Street Journal, for the first time in a decade, sales of Coca-Cola products have risen more than 2 percent. In a limited-time promotion, Coke labeled its flagship soft-drink with names like Jasmine, Brandon and Greg, and buzz-words like "BFF," "Soulmate" and "Buddy."

The Journal quoted one customer who said, "To see your name on a big brand, it makes it personal."

Unless you've got an oddly-spelled name like mine, then you're probably out of luck — unless you're interested in a virtual bottle of Coke, of course.

But those virtual bottles I'm complaining about are made for sharing on social media; and that might be a big part of Coca-Cola's recent success. A writer for The Verge suggests the social media aspect of the campaign likely played a big role in growing Coke's sales.

Customers were encouraged to share photos with their personalized drinks on all types of social sites using the hashtag "#shareacoke." The company continues to update its promotional page with photos from customers who've used the hashtag.

And AdWeek quotes one Coca-Cola executive who explains why she thinks the campaign worked. "The campaign capitalized on the global trend of self-expression and sharing, but in an emotional way. Coke is big enough to pull off an idea like this, which speaks to the iconic nature of the brand."

But that pathos-packed explanation probably isn't the only reason why Coca-Cola decided to launch the "Share a Coke" campaign.

As The Independent points out, this is a well-tested sales technique for Coca-Cola. The company tried it out in Australia in 2011 and saw a big jump in sales, so they brought it to 80 other countries.

The next time you head to the store, you'll probably see those nametagged bottles dwindling. The campaign is coming to a close, but Coca-Cola's brand manager told The Wall Street Journal the company is giving "serious consideration" to bringing back the names in 2015. Maybe it'll even have one for me.