Coca-Cola Is Venturing Into The Milk Business 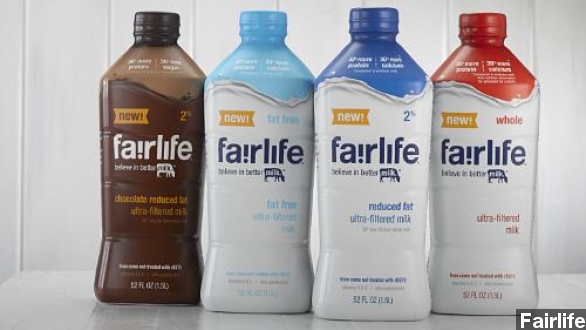 Well, how about an ice-cold glass of milk from Coca-Cola?

Tuesday the company announced its Minute Maid division is teaming up with milk producer Fairlife to offer a line of super-fortified milk.

In a press release, Fairlife announced the new line of milk will contain "50 percent more protein, 30 percent more calcium and half the sugar of ordinary milk."

But all that extra calcium and protein isn't going to be easy on your wallet.

The Guardian reported a 52-ounce bottle of the milk, which is less than half a gallon, is priced at $4.59 on store shelves.

That's compared to the average price of $3.82 for a gallon of whole milk — which is more than twice as much of the drink — according to the U.S. Bureau of Labor Statistics.

Despite the outrageous price, there might be decent customer demand for this new milk.

In September, the International Business Times reported milk consumption in the U.S. was estimated to be around 93.4 million metric tons.

And according to The Verge, the milk tastes pretty much like regular milk, although the writer noted it has an aftertaste that's similar to one you get after drinking a protein shake.

Now, Fairlife's CEO was quick to point out to USA Today that Coca-Cola is not involved with the actual milk production process. The beverage company is just helping "bring the product to market."

While this milk might seem like a big stretch for Coke, it's spent time diversifying its holdings over the past year.

It became the largest shareholder in Keurig Green Mountain in May, and then in August, Coke announced it had purchased a 16.7 percent stake in the Monster Beverage Corporation.

Part of the reason for these new holdings might be because Coke's domestic sales have faced struggles.

In the third quarter of 2014, for example, they were down around 14 percent compared to the same quarter in 2013.

The milk is currently on sale in the U.S. in stores like Wal-Mart and Kroger. No word on whether there are plans to start selling in other countries.