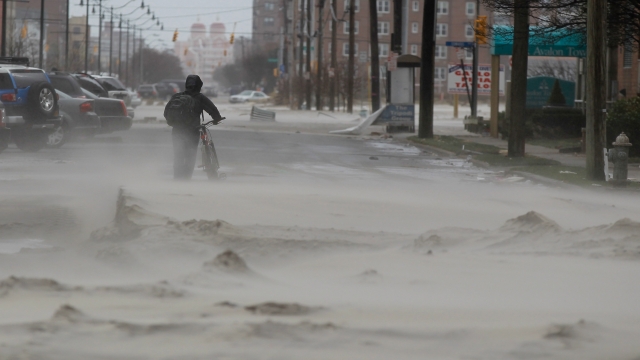 SMS
How Coastal Communities Buy Time Against Rising Sea Levels
By Evan Thomas
By Evan Thomas
November 5, 2016
Sea levels have climbed since we started recording them, and coastal communities spend big to keep the encroaching waters at bay.
SHOW TRANSCRIPT

Coastal areas in the U.S. have a problem: They're right next to the ocean.

Those oceans have been rising since we started keeping track. Thanks to the changing climate, they're expected to keep rising, anywhere from 8 inches to more than 6 feet in the next century. Now oceanfront communities have to figure out how to keep the waters at bay.

It can be as easy as rebuilding beaches. New Jersey and Florida have refilled sand on their coastlines for decades. New sand every few years can keep erosion in check and protect seaside structures.

Other projects are more permanent and more expensive. It cost $14.5 billion to rebuild New Orleans' levees after Katrina. New York City is spending big on a planned 10-foot barrier that will wrap around most of Lower Manhattan.

And in some cases, federal and state governments step in and buy a buffer against storm surges. After Hurricane Sandy, New York and New Jersey bought out damaged homes along the coast and turned them into open space.

Some experts think the U.S. might need to do even more drastic things in the future, like moving further inland, away from swamped coasts. But it won't happen soon. Nearly 40 percent of the U.S. lives in coastal counties, and the share is climbing right along with the sea level.