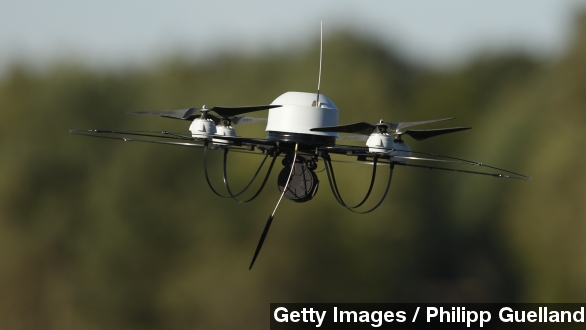 SMS
CNN Tries To Move FAA Polices Along With Drone Testing Deal
By Ben Lawson
By Ben Lawson
January 12, 2015
CNN has signed a deal with the FAA to share its drone testing data, a move meant to speed up the agency's progress writing drone rules.
SHOW TRANSCRIPT

Hoping to speed up government regulators, CNN has signed an agreement with the Federal Aviation Administration to test drone use in reporting.

The FAA currently bans the use of drones in news coverage and is still in the middle of developing policies on commercial drone use as a whole. (Video via Parrot)

The agency has concerns about drone safety. Chief among them is any potential interference with commercial planes. Last October, 41 pilots reported seeing a drone during flight.

CNN is among several companies growing frustrated with the FAA's pace at hammering out its polices. So, in June, the news network announced it was partnering with the Georgia Institute of Technology for a research initiative.

This latest deal with the FAA is so the agency can use that research to help develop its own drone policies.

This doesn't mean we'll see a flood of drone footage on CNN, but the network hopes that by sharing its research, it can achieve that a bit sooner.

The FAA originally set out to have policies in place for safe commercial drone use by September 2015. But it now says the process is taking longer than expected and likely won't be finished until 2017. (Video via World Tech Toys)

That's not fast enough for companies like Amazon, which is hoping to someday use drones to deliver its products.

In a threatening letter from December, an Amazon official warned the company would take its drone testing outside the U.S. if the FAA doesn't speed things along. It accused the agency of overlooking "the fundamental benefits of keeping [unmanned aircraft systems] technology innovation in the United States."

Despite its restrictive drone rules, the FAA has approved some companies, such as Trimble Navigation and Woolpert, to test commercial drone use in uninhabited regions, but the list of exempt companies is still very short.