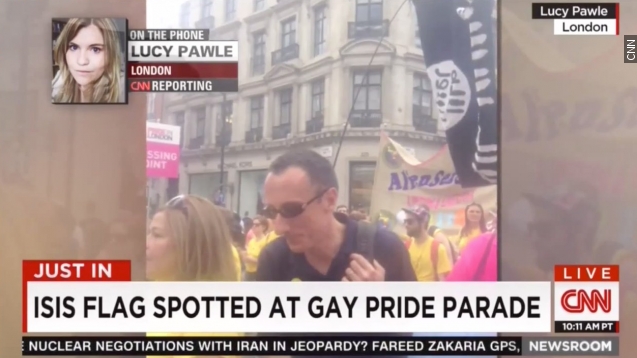 SMS
CNN Quiet After Falsely Reporting ISIS Flag At Pride Parade
By Matt Moreno
By Matt Moreno
June 28, 2015
CNN reported on what appeared to be an ISIS flag at a gay pride parade in London, except the flag was actually a parody that featured sex toys.
SHOW TRANSCRIPT

"If you look at the flag closely, it's clearly not Arabic. In fact, it could be gobbledygook, but it's very distinctly the ISIS flag," CNN reporter Lucy Pawle says.

CNN is a bit red in the face after its correspondents thought a black and white flag that had images of sex toys on it was an ISIS flag. CNN's Lucy Pawle reported seeing the flag at a gay pride rally in London Saturday morning. CNN National Security Analyst Peter Bergen also commented on the flag but was a bit more skeptical, suggesting it could be a parody.

Still, it didn't take long for people to notice the mistake.

For reference, here's what an ISIS flag actually looks like — a black flag with white text, which translates to "There is no god but God. Muhammad is the messenger of God." The symbol of Muhammed is at the bottom.

In the interview, Pawle said she reported the flag to the police and to an event organizer, though she mentions no one seemed to be concerned except for her.

Europe is on especially high alert to attacks from ISIS after the group took credit for killing dozens at a beach resort in Tunisia over the weekend. Many killed were British. (Video via Tunisia News Network)

In the replies section of her Twitter account, Pawle asked one user where they saw the flag. Later on, she seemed to respond to a now-deleted user who questioned her reporting. Pawle said, "I reported no such thing."

And while Pawle didn't exactly apologize for the mistake on Twitter, she did retweet several users saying the flag appeared to be satirical.

Video of the news story has been removed from CNN's website.