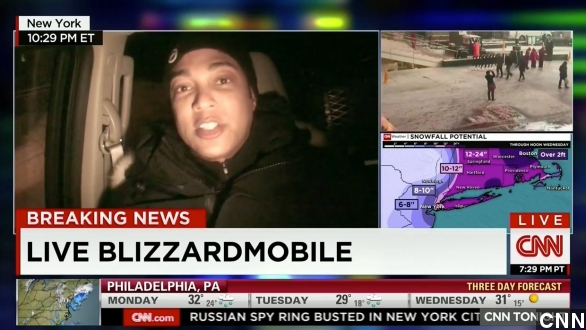 Combine what was billed as historic weather with the most densely populated section of the country, and surely we're not going to see the TV news industry reduce a dangerous, crippling blizzard to a bunch of cliches again, right?

"The second hashtag would be Snowmaggedon 2015."  said Richard Lui on MSNBC.

"Are you ready for Snowmaggedon?" said Carol Costello on CNN

"Call it snowmaggedon, snowpocalypse, whatever. A blizzard, if you haven't heard by now, is coming this way," said CNBC's Bill Griffeth

But why go searching all over cable and local news for over-the-top Northeast snowstorm coverage when a single anchor puts it all in one place for us?

Of all the major news networks, CNN received some of the harshest criticism for its coverage — mainly for using a so-called Blizzardmobile and having anchor Don Lemon ride around on closed streets in New York.

"If you are on the street in New York City and you are not an emergency vehicle, you are breaking the law," Lemon said.

The irony of the whole thing even resulted in Lemon trending on Twitter.

The storm originally was projected to bring up to three feet of snow with hurricane force winds in areas of the northeast. That prompted governors to declare states of emergency and travel bans in several states. While the strong winds came, the snow by and large fell short.

Which prompted people reacting to the storm — expected to be historic, dangerous, treacherous and more — in a not-so-serious way.

"So, this is happening," said the CNN reporter.

"I'm going to throw my anemometer off to the side and if you... everybody's having a great time out here with the snow," said The Weather Channel's Raegan Medgie.

Eastern portions of New York, Massachusetts and Maine appeared to be hardest hit by the storm with 20 inches recorded in some areas. Again, that's a lot. Just perhaps not compare-to-the-apocalypse levels.