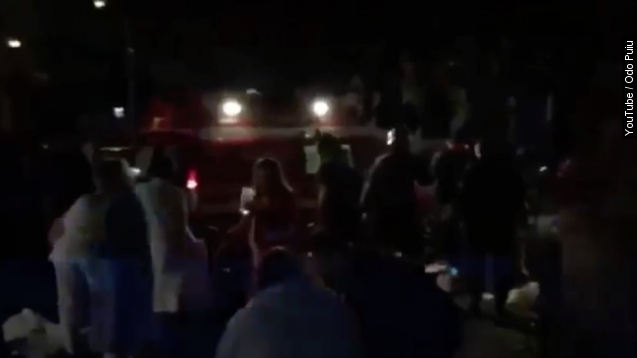 SMS
Club Explosion Kills Dozens In Bucharest
By Matt Picht
By Matt Picht
October 30, 2015
Romanian outlets speculate fireworks might have been responsible for a lethal explosion and fire at a Bucharest club.
SHOW TRANSCRIPT

An explosion and fire at a nightclub has left dozens of people dead and many more wounded in the Romanian capital of Bucharest late Friday.

Multiple outlets report the explosion happened during a rock concert at the Colectiv nightclub; there's speculation fireworks were involved in the blast and resulting fire. An estimated 300-400 people were in the club at the time.

"From what we know so far there was only one exit, so obviously everybody rushed and tried to get out. A lot of people with severe burns or intoxicated by the smoke, a lot of people scared," local reporter Paul Angelescu told CNN.

Romanian President Klaus Iohannis called the explosion a "very sad day for all of us, for our nation and for me personally." Officials have set up an emergency hotline to help families locate their loved ones at the scene.