Clinton, Trump, A Gorilla? What A Unique Question Tells Us About Polls 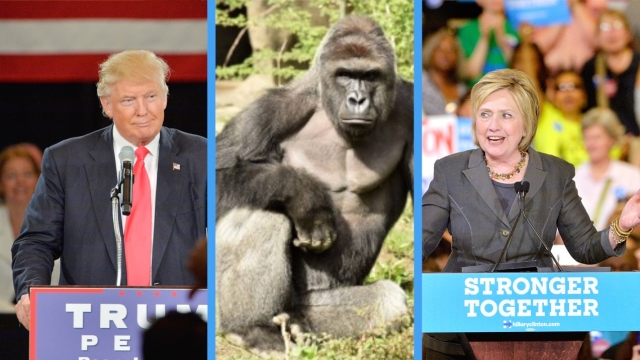 If a dead gorilla ran for president against Hillary Clinton and Donald Trump, he would take 5 percent of the vote, according to a new poll from Public Policy Polling.

That gorilla is Harambe, who was shot and killed after dragging a young boy through his enclosure at the Cincinnati Zoo in May.

SEE MORE: Family Will Not Be Charged For The Death Of Harambe The Gorilla

The question is: Do voters even know who Harambe is? The poll question doesn't explain he's not human. It only says Harambe would be running as an Independent against the Republican, Trump and Democrat, Clinton.

Five percent of voters have a favorable opinion of Harambe while 27 percent have an unfavorable one. But 69 percent said they weren't sure what their opinion was.

Why ask about Harambe as opposed to the real person running as an Independent, Gary Johnson? Well, PPP did ask about Gary Johnson and Green Party candidate Jill Stein. Johnson didn't fare much better than Harambe.

Previous polls conducted by PPP can give us some insight into PPP's reasoning for unique questions. In December, it asked whether the U.S. should bomb the fictional kingdom in the Disney movie "Aladdin." The thing is, respondents didn't necessarily know it was fictional, and that's what got some of the most attention following the poll's release.

Are poll respondents informed? Do they respond to poll questions even if they don't know what's being asked? Those are the things some PPP questions try to help answer.

But it appears the polling firm also just likes to ask really strange questions like: "Do you have a favorable or unfavorable opinion of the Dunder Mifflin Paper Company?" and whether President Obama and Sarah Palin "would be taken up to Heaven in the Rapture or not?"

In the same poll as the Harambe question, PPP asked if Clinton had ties to Lucifer. While a majority said no, 18 percent said yes and 21 percent said they weren't sure.

PPP takes suggestions for questions from the public, so you can try your hand at creating some bewildering questions.