Clinton Serves Herself A Pick-Me-Up On 'SNL' 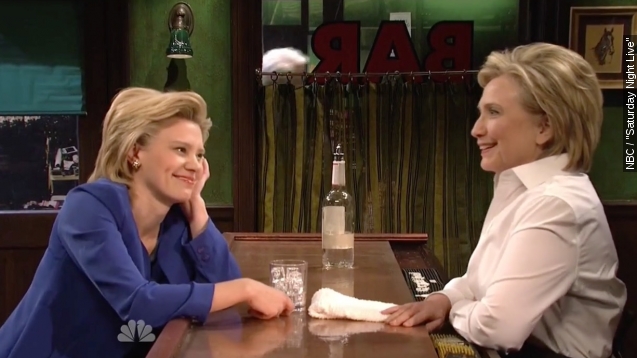 Hillary Clinton stopped by for the "Saturday Night Live" season premiere to — what else? — catch up with her on-screen doppelganger. (Video via Hillary For America)

The Democratic presidential hopeful played a sympathetic bartender alongside Kate McKinnon's Clinton impersonation. The pair commiserated about the tribulations of campaigning, took some shots at the competition and indulged in a little light karaoke.

Hanging out with her lookalikes is an old trick for Clinton. During the 2008 presidential race, she turned up to critique Amy Poehler's impersonation of her. But Clinton says it's all in good fun.

"I love the impersonations of me. ... They come at it from a slightly different perspective, and I learn something about myself watching them pretending to be me," Clinton told Entertainment Tonight.

Her appearance comes after a summer of damaging press stories about her private emails server — a scandal that is still eating away at Clinton's favorability ratings.

Over the past month, Clinton's been trying to recuperate from the scandal and show off her softer side with a string of lighter media appearances — some more successful than others.

And Clinton's campaign clearly hopes her SNL appearance will help polish up her image. One Democratic pollster told The Wall Street Journal Clinton's trying to show that "she's not the butt of the joke. She’s in on the joke."