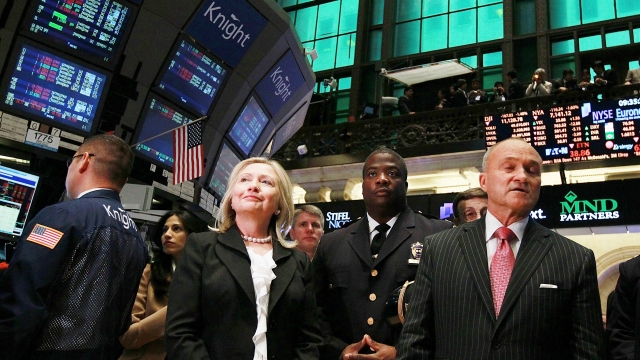 SMS
Clinton Says She'll Release Wall Street Speeches If Rivals Do The Same
By Ryan Biek
By Ryan Biek
February 7, 2016
Hillary Clinton says she'll release the transcripts of speeches she gave to private groups if her opponents in the presidential race do, too.
SHOW TRANSCRIPT

Presidential candidate Hillary Clinton said Sunday she'd release the transcripts for the speeches she gave to Wall Street banks if her rivals did the same.

"Let everybody who’s ever given a speech to any private group under any circumstances release them. We’ll all release them at the same time," Clinton told ABC.

Clinton has gotten backlash for reportedly receiving millions for speeches given over the last several years. That includes $675,000 from Goldman Sachs in return for multiple speeches she made while she was secretary of state.

"Well, I don't know. That's what they offered," Clinton said.

Some have argued that response wasn't strong enough to justify the payout. Clinton insisted her speeches promoted her own views, and at the time, she didn't know she would be running for president.

She added on ABC that others running for president have made speeches to high-profile groups and said, "These rules need to apply to everybody."