Clinton's Relationship With Kissinger Could Underline Her Hawkishness 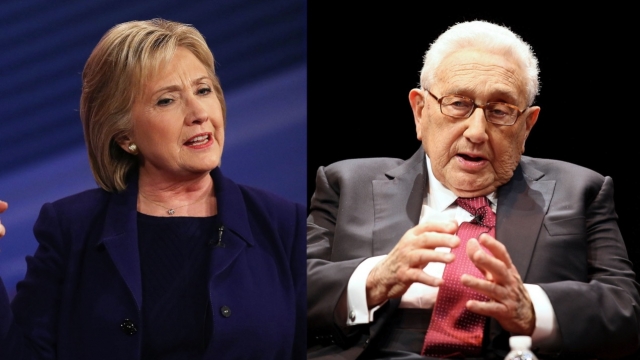 "Henry Kissinger was one of the most destructive secretaries of state in the modern history of this country. I am proud to say that Henry Kissinger is not my friend," presidential candidate and Vermont Sen. Bernie Sanders said at the PBS Democratic debate.

So Bernie Sanders really doesn't like former Secretary of State Henry Kissinger and is now using Hillary Clinton's friendship with Kissinger as a round-the-way attack on her foreign policy stances.

One thing is clear, the two secretaries of state seem to have a pretty close relationship. Clinton even wrote a review of Kissinger's book for The Washington Post in 2014 and said, "Kissinger is a friend, and I relied on his counsel when I served as secretary of state."

But Kissinger's legacy from his service during the Nixon and Ford administrations is fraught with controversy.

Kissinger was instrumental in brokering better Chinese-American relations, and he helped negotiate the Paris Peace Accords, which eventually led to the end of America's direct involvement in Vietnam.

The accords even earned Kissinger a Nobel Peace Prize, though two members of the committee resigned after Kissinger was announced as a winner.

But Kissinger's critics on the left are many, with some even calling him a "war criminal." A writer for The Intercept put like this: "Left-leaning observers of foreign policy ... consider him an amoral egotist who enabled dictators, extended the Vietnam War ... stage-managed a genocide in East Timor, overthrew the democratically elected left-wing government in Chile and encouraged Nixon to wiretap his political adversaries."

A stronger critic wrote in The Nation, "A full tally hasn’t been done, but a back-of-the-envelope count would attribute 3, maybe 4 million deaths to Kissinger’s actions. ... Pull but one string from the current tangle of today’s multiple foreign policy crises, and odds are it will lead back to something Kissinger did between 1968 and 1977."

To be clear, Kissinger has never been charged with any war crimes, but since he left the State Department, the demand for such a charge has followed him.

This video includes images from Getty Images and clips from PBS and C-SPAN.