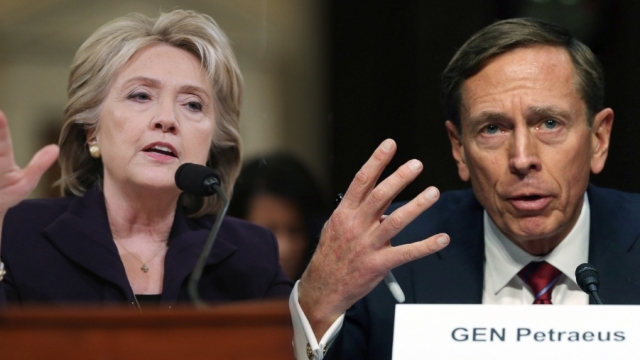 FBI Director James Comey has heard the comparisons between Hillary Clinton and Gen. David Petraeus, and he's not having it anymore.

"He admitted he knew that was the wrong thing to do. That is the perfect illustration of the kind of cases that get prosecuted," Comey said.

Donald Trump is one person making these types of comparisons.

"When you look at what she has done compared to Gen. Petraeus, it's 20 times greater. It's not even a contest," Trump said.

"Gen. Petraeus, for doing a tiny fraction of what she did, his life is destroyed. He's been ruined," he said in a different interview.

SEE MORE: No Charges For Clinton, But That Hasn't Stopped The Commentary

Petraeus knowingly gave highly classified information to his mistress, Paula Broadwell. During his interview with the FBI, he lied about it. Eventually, he pleaded guilty to a misdemeanor, avoiding jail time.

"You have obstruction of justice, you have intentional misconduct and a vast quantity of information. In my mind, it illustrates importantly the distinction to this case," Comey said of the Petraeus case.

Although Clinton's FBI investigation found that Clinton and her aides mishandled information, it didn't uncover evidence that they intended to break the law. Comey points to that as a reason the FBI didn't recommend any misdemeanor charges.

This video includes images from Getty Images and clips from The Aspen Institute, Hillary for America, C-SPAN and CBS. Music provided courtesy of APM Music.