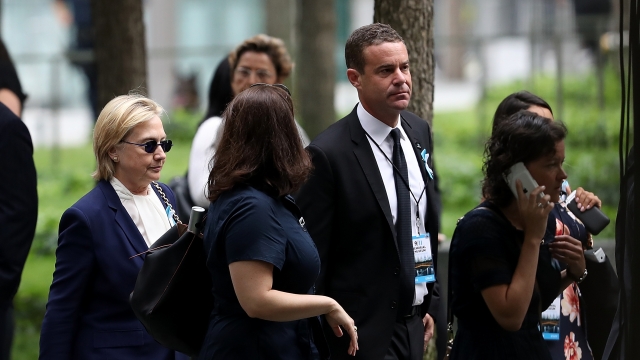 Questions were swirling after Hillary Clinton left a 9/11 memorial service early, and now her doctor says pneumonia is to blame.

Dr. Lisa Bardack released a statement to the media saying the Democratic nominee was diagnosed with pneumonia on Friday. The doctor said Clinton was put on antibiotics and told to rest.

Earlier Sunday, the Clinton campaign said she became overheated at the ceremony in New York City and regained her energy after resting at her daughter's apartment.

"Yes, thank you very much. Thanks everybody," Clinton responded.

Bardack said she examined Clinton after the incident at the ceremony and noted she is "re-hydrated and recovering nicely."

In late July 2015, Dr. Bardack released a summary of Clinton's previous medical conditions and overall health. That statement covers her ongoing medical issues, such as hypothyroidism and seasonal allergies, and her previous issues including a stomach virus and concussion. Her family history includes various heart issues, but Clinton's own cardiac evaluation came back clean.

But this commotion feeds into accusations from the Donald Trump campaign that Clinton's health makes her unfit to be president.

Recently, critics have pointed to coughing fits as an indication of Clinton's failing health. But the persistent cough was previously attributed to allergies.

Clinton and her campaign insist her health is not a concern.