Clinton's Challengers Have A Lot Of Ground To Make Up 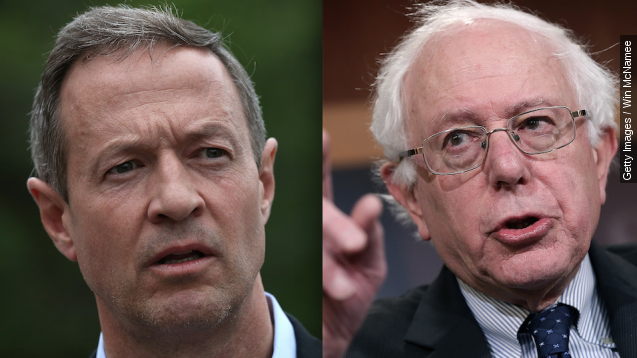 Martin O'Malley's in. Bernie Sanders is in. And these guys you might not have heard of will probably be in, too.

But what makes any of them think they can beat the frontrunner for the Democratic nomination?

Here’s the challenge candidates face in taking on Hillary Clinton — a huge gap in support that seems tough to tackle even in the 13 months until next year’s convention.

Sure, Clinton was the frontrunner in 2007, too, but at this point in the race, her opponents weren’t all that far behind.

It’s an uphill battle, but for the candidates, it starts with showing voters how they’re different.

Of all the Democratic hopefuls in this race, Bernie Sanders, probably won’t have a tough time distinguishing himself — after all, he’s not even a Democrat, he’s a Democratic Socialist.

And even if he doesn’t exude charisma, many Sanders supporters say, if nothing else, the Vermont senator could push Clinton to the left on some issues.

But he and the Democratic party at large do have one common enemy: Wall Street.

Martin O’Malley especially has tried to tie that vilified financial class to both Hillary Clinton and Jeb Bush.

"I've got news for the bullies of Wall Street: The presidency is not a crown to be passed back and forth by you between two royal families," O'Malley said in his campaign announcement.

That could be a sensitive subject for Clinton and the Democratic base. After all, her biggest donors throughout her career include Goldman Sachs and JP Morgan.

And O’Malley, Sanders and whoever else jumps into the race will try to turn their one big weakness into an advantage.

Their hope is that low support and lower name recognition doesn’t mean their ideas have been rejected. It just means voters haven’t heard those ideas yet.