Clinton Ramps Up Attacks After Sanders Takes The Lead In Iowa 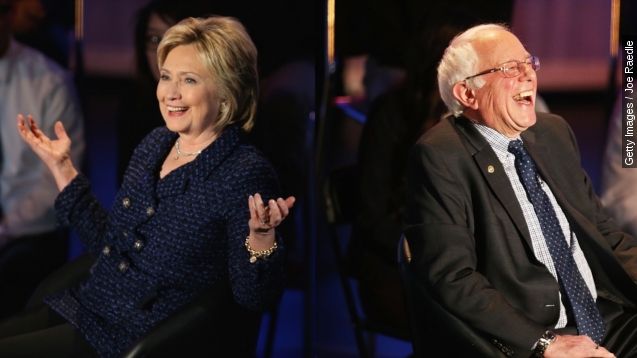 SMS
Clinton Ramps Up Attacks After Sanders Takes The Lead In Iowa
By Eugene Daniels
By Eugene Daniels
January 12, 2016
For the first time since September, Sen. Bernie Sanders is leading the pack in Iowa. Is the Clinton campaign nervous?
SHOW TRANSCRIPT

And the Democratic presidential nomination race just got a bit more interesting. At least in Iowa.

In a new Quinnipiac University poll, Sen. Bernie Sanders comes out on top with 49 percent of likely Iowa caucus voters choosing him over former Secretary of State Hillary Clinton. It's the first time he's led there since September.

You can compare that to the same poll from about a month ago where Clinton led Sanders by 11 points. (Video via Hillary for America)

Likely voters said Sanders could handle the economy and climate change better than Clinton could. And when it comes to trustworthiness, Sanders gets a 92 percent to Clinton's 69 percent. But when it comes to terrorism, foreign policy and health care, respondents chose Clinton.

It seems like Sanders' rise in the first caucus state could be getting to Clinton. On the same day, Clinton ramped up her policy attacks on Sanders. (Video via Bernie 2016)

"If that's the kind of revolution he's talking about, I am worried folks," Clinton told a crowd, critiquing Sanders' health care plan.

Clinton doesn't have a good track record with the Iowa caucus. In 2008, she took third in the state behind both then-Sen. Barack Obama and Sen. John Edwards. (Video via Hillary for America)

Sanders is leading in the first primary state, New Hampshire, too. Winning both would be big for Sanders who is still fighting off claims of his electability. But for the next two contests, South Carolina and Nevada, Clinton still holds double-digit leads in both. (Videos via Bernie 2016, Hillary for America)