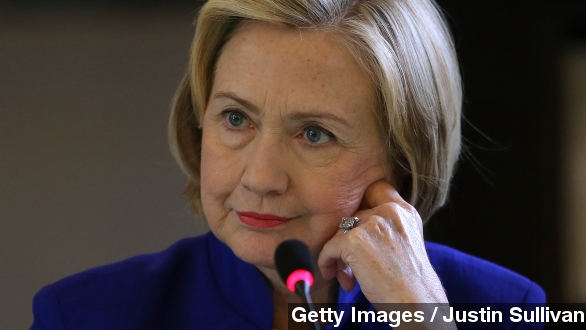 SMS
Clinton: Private Email Account Was About Convenience
By Kate Grumke
By Kate Grumke
March 10, 2015
Hillary Clinton responded for the first time to questions about her private email account used during her time as secretary of state.
SHOW TRANSCRIPT

"Looking back, it would have been probably, you know, smarter to have used two devices, but I have absolute confidence that everything that could be in any way connected to work is now in the possession of the State Department," Hillary Clinton said.

For the first time, Hillary Clinton spoke out Tuesday about the controversy surrounding her use of a private email account during her time in the Obama administration.

The potential 2016 contender said the way the laws are in place puts the responsibility on the government official to decide which emails are work-related.

"The federal employee, the individual, whether they have one device, two devices three devices, how many addresses, they make the decision," Clinton said. "So even if you have a work device with a work-related .gov account, you choose what goes on that. That is the way our system works. ... I feel that I did that and even more — that I went above and beyond what I was requested to do."

And Clinton said the private server she used was first used by her husband, President Bill Clinton, and that it was secure.

"It had numerous safeguards, it was on property guarded by the Secret Service, and there were no security breaches," Clinton said. "I think the use of that server, which started with my husband, certainly proved to be effective and secure."

Clinton answered questions from the press after addressing an event on gender equality at the U.N.

Although the press conference was in the name of transparency, many reporters tweeted about difficulty getting into the event.

Before Tuesday, Clinton's only public reaction was a tweet posted on her account Wednesday evening that said: "I want the public to see my email. I asked State to release them. They said they will review them for release as soon as possible."

"The policy of my administration is to encourage transparency," President Obama said. "And that's why my emails, the BlackBerry that I carry around, all those records are available and archived, and I'm glad that Hillary has instructed that those emails that had to do with official business need to be disclosed."

This comes as reports say Clinton could make an announcement about a possible 2016 presidential bid in early April. She says her emails will eventually be in the public domain for the American public to read.