Clinton Might've Won The Nomination, But Sanders Isn't Giving Up Yet 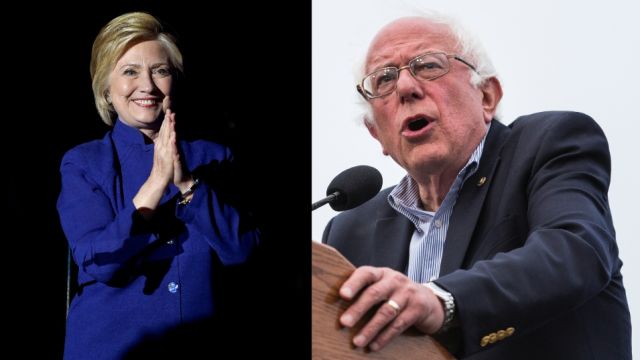 Even though news outlets have called the Democratic presidential race for Hillary Clinton, she and Bernie Sanders aren't slowing down. Democratic voters in California, New Jersey, New Mexico, Montana and the Dakotas will head to the polls Tuesday.

And now the question is: Now that some outlets say Clinton has clinched the nomination, will as many vote as expected?

Both Clinton and Sanders seem to hope so, especially with California expected to be a close race.

Within about an hour of the news breaking Monday night, both candidates urged those at their rallies to still vote.

"Go to the polls tomorrow and take your family and your friends," Clinton told a crowd in Long Beach, California.

Sanders didn't specifically address the news at his rally in San Francisco. Instead, his campaign released a statement, saying, "It is unfortunate that the media, in a rush to judgment, are ignoring the Democratic National Committee's clear statement that it is wrong to count the votes of superdelegates before they actually vote at the convention this summer."

News outlets made the call Monday after their calculations showed the former secretary of state just barely had enough delegates to secure the nomination. However, Clinton is expected to win the New Jersey primary on Tuesday, which after California, has the largest delegate prize.

Sanders has vowed to campaign all the way to the convention in July, arguing he has greater momentum. A win in California, where a total of 475 pledged delegates are at stake, could help him convince superdelegates to support him instead.

But even so, it appears Clinton leads him by more than 500 superdelegates.

This video includes clips from CNN, MSNBC and C-SPAN and images from Getty Images.