Clinton May Have The Popular Vote, But Trump's Leading In Swing States 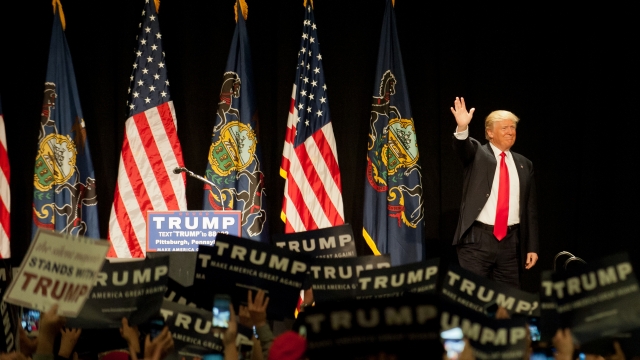 SMS
Clinton May Have The Popular Vote, But Trump's Leading In Swing States
By Ryan Biek
By Ryan Biek
July 13, 2016
A Quinnipiac University poll has good news for Trump in Florida and Pennsylvania.
SHOW TRANSCRIPT

Donald Trump may have some tactical advantages over Hillary Clinton in the race for the White House: Florida and Pennsylvania.

A new Quinnipiac University poll found when the two candidates were matched head-to-head in key swing states, Trump led by 2 percentage points in Pennsylvania and 3 points in Florida. He tied with Clinton in Ohio, a third major swing state.

It's quite a shock compared to national polls, which have given Clinton a significant, mid-single-digit lead over the Republican front-runner.

SEE MORE: Pollsters Are Running Out Of Ideas, So Now We Know Where Voters Shop

But how the country, as a whole, favors candidates can mean less than how a select few states vote — and how much the states are worth in the electoral college.

Florida and Ohio are two of only three states in the last decade to have voted for every candidate that has won the presidency.

Yet Pennsylvania may be an even more valuable swing state for Trump to claim, considering it hasn't voted Republican since 1992.

All of those head-to-head results are within the margin of error, meaning they may really be too close to call.

And a wider picture could give Clinton and her supporters a sigh of relief. In Politico's average of five polls, she actually leads in all three of those swing states

However, this Quinnipiac poll was the only one included that was taken in July, after the FBI recommended against charges being brought in Clinton's email scandal. A majority of Americans disagreed with that decision.

What may catch Clinton's eye even more: When the Quinnipiac poll added in the Libertarian and Green Party's candidates, Trump took a wider lead in all three of those swing states.