Clinton Is Not Tipping Her VP Hand Based On Speaker Slots 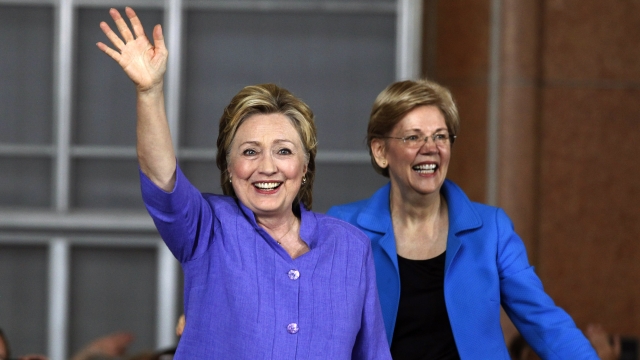 SMS
Clinton Is Not Tipping Her VP Hand Based On Speaker Slots
By Eugene Daniels
By Eugene Daniels
July 12, 2016
Sen. Elizabeth Warren is speaking on the first night of the Democratic National Convention, leading some to believe she's not the VP pick.
SHOW TRANSCRIPT

Sorry, folks, but Hillary Clinton isn't picking Elizabeth Warren as her vice president. That's according to The New York Times at least.

Nope, there wasn't an announcement from either camp; the Times is simply going off of the fact that the Massachusetts senator has a prime-time speaking spot on the first night of the Democratic National Convention.

Giving Warren an extremely visible speaking spot early on is honestly a no-brainer for the Clinton camp. She's been a great Trump attack dog and is a charismatic darling of the progressive wing of the Democratic Party.

SEE MORE: The Drawbacks Of A Clinton-Warren Ticket

But the Times concludes Monday is too early for a vice presidential pick to speak, stating, "Such nominees usually speak later in the convention week to build anticipation for the top of the ticket."

Yes, the last two non-incumbent vice presidential picks, Joe Biden and John Edwards, spoke on the third day of the convention. But even the Times' sources concede this doesn't actually mean anything — the speaking schedule isn't set in stone.

The sources also said, "Ms. Warren and other individuals who received invitations on Tuesday to address the Philadelphia convention were told that their speaking times were subject to change depending on who was selected for vice president."

Warren's VP chances probably come down to how badly Clinton needs to attract far-left progressives to her cause. And current general election polls suggest Clinton doesn't have to worry about that just yet; the Real Clear Politics average gives Clinton an almost five-point lead over GOP presumptive nominee Donald Trump.