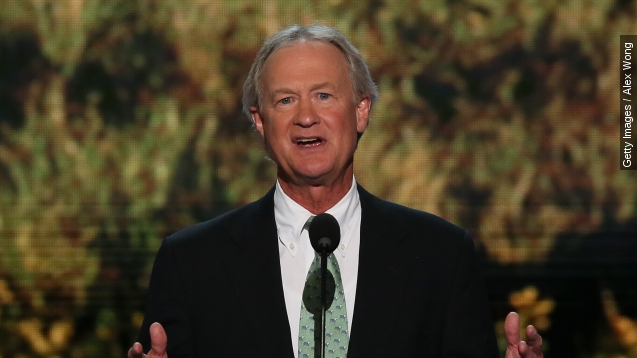 Although their field is nowhere near the size of the ever-growing list of Republicans, it appears Democrats now have another candidate vying for the 2016 presidential nomination. (Video via Hillary for America, C-SPAN, Martin O'Malley)

Chafee used to be a Republican, appointed to the Senate in 1999 after the death of his father. (Video via WNYC)

He's since split with the GOP, becoming the governor of Rhode Island as an Independent in 2010 and later joining the Democratic Party in 2013.

Some link that split back to Chafee's stance on the 2003 invasion of Iraq. He's the only Republican senator in the country who voted against authorizing military force. (Video via WPRI)

And he's used that particular vote as a bludgeon against Democratic front-runner Hillary Clinton — pointing out her vote in favor of the unpopular war.

He told The Washington Post in April: "I don't think anybody should be president of the United States that made that mistake. We live with broad, broad ramifications today — of instability not only in the Middle East but far beyond and the loss of American credibility."

In Chafee's speech Wednesday, he painted himself as the "international diplomacy" candidate. And he had a list of suggestions for how the U.S. could begin working more closely with the international community. Among them:

"Let's join the rest of the world and go metric. … It will help our economy."

While the field is small, like other non-Clinton candidates, Chafee's still seen as a long shot.

An ABC/Washington Post poll from May had Chafee as the Democratic candidate of choice for just 1.4 percent of Democratic and Democratic-leaning registered voters.