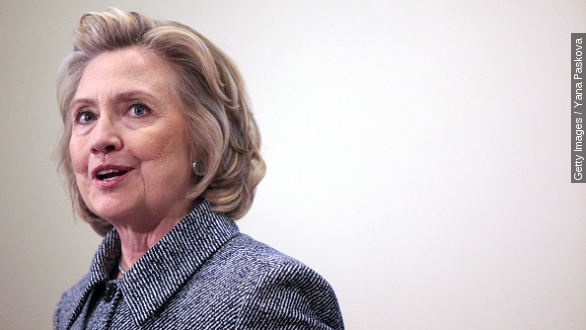 Hilary Clinton's presidential campaign hasn't technically started, but that hasn't stopped her team from signing a lease for some 80,000 square feet of campaign office space in New York City.

The address is 1 Pierrepont Plaza, located in the wealthy Brooklyn neighborhood of Brooklyn Heights, just across the East River from Manhattan.

The location boasts state-of-the-art security, a lot of nearby public transportation, and three Starbucks within a two-block radius — basically everything you'd need to organize a presidential campaign.

Several media outlets have now confirmed the new headquarters. Clinton leased two full floors of the 19-story building, which she'll be sharing with JP Morgan and the U.S. Attorney for the Eastern District of New York.

But it's still Brooklyn — a borough better known for its ethnic enclaves and youthful ethos than high-octane politics. A Republican operative from Iowa said, "We're more likely to be impressed if you're close to a Wal-Mart."

For Clinton, the spot is the best of both worlds. Brooklyn is the symbolic home to the types of liberal voters that made Obama's victories possible, but Brooklyn Heights is as close as Brooklyn gets to lower Manhattan — home to the big money that Clinton will rely on for her campaign. (Video via C-SPAN)

The move also puts Clinton much closer to being a declared candidate. An expenditure of over $5,000 on an item that "indicates campaigning" is a "campaign activity" under election laws, meaning she now has only 15 days to create an official campaign committee.

The lease continues a bipartisan trend of major presidential campaigns finding major U.S. cities to call home -- President Obama ran his campaign out of Chicago, Romney housed his team in Boston and even John McCain's main office was in the wealthy D.C. suburb of Arlington.

As for Clinton's new landlord, it's not clear they knew what they were getting into -- Real Clear Politics reports their leasing agent has received over 60 phone calls and is "having a pretty surreal day."