Hillary Clinton Allies Polled Voters About Obama's Cocaine Use In 2008 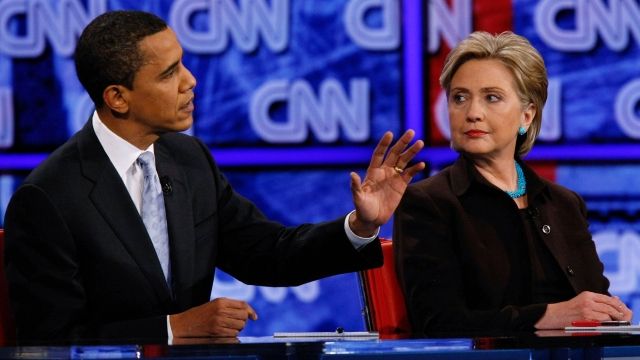 SMS
Hillary Clinton Allies Polled Voters About Obama's Cocaine Use In 2008
By Briana Koeneman
By Briana Koeneman
October 17, 2016
In an email exchange released by WikiLeaks, some of Clinton's top allies discussed attacking then-Sen. Barack Obama about his past cocaine use.
SHOW TRANSCRIPT

Back in 2008, some of Hillary Clinton's top allies considered attacking then-Sen. Barack Obama about his past cocaine use.

This new information comes from one of the many emails WikiLeaks released from Clinton campaign chairman John Podesta last week.

One particular email exchange from January 2008 focuses on a poll about potential weak spots for Obama, who was running against Clinton in the Democratic presidential primaries.

According to the email, the survey included several negative topics, including, "Obama described his former use of cocaine as using 'a little blow.'"

In his memoir, "Dreams of My Father," Obama admitted to experimenting with cocaine and marijuana when he was young.

After the emails were released, the executive director of the company that conducted the poll told Politico it wasn't meant to help Clinton get a leg up over Obama during the primaries.

He told the outlet, "We were an effort that was about electing the most progressive candidate and opposing whoever the Republican candidate was going to be. We tested the vulnerabilities of both Hillary Clinton and Barack Obama in a hypothetical matchup against John McCain."

Clinton's campaign hasn't confirmed or denied the authenticity of any individual messages from WikiLeaks' email dump.

But Podesta has said that his personal emails were hacked, and he is cooperating with the FBI.