Climate, Markets And Mouths: The Problems With Food Supplies 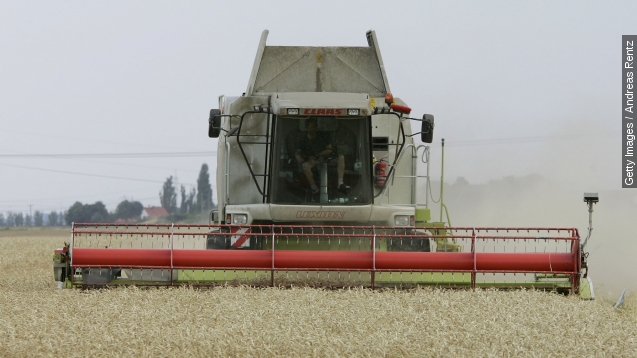 An international team of researchers has quantified the biggest problems with Earth's food. In a nutshell, it's getting harder to grow enough to feed everyone.

Droughts, heat waves and floods likely brought on by climate change are getting more frequent, as is their suppressive effect on the global food supply. (Video via KOVR)

Researchers with the U.K. Global Food Security program stress their numbers are predictions based on limited data but nonetheless suggest "the risk of a 1-in-100 year production shock is likely to increase to 1-in-30 or more by 2040."

Their models suggest by 2070, such shocks could be happening in seven out of every 10 years. (Video via CBC)

The changing climate is one of three major stress points on food reserves.

According to the researchers, the interconnected economies of global trade represent a "structural vulnerability" that can make food shocks elsewhere even worse. (Video via Deutsche Welle)

When countries impose export restrictions to ensure their own food security, for example, prices spike. Studies suggest this played parts in food riots in northern Africa in 2010 and 2011 and even influenced the Arab Spring movement. (Video via Al Jazeera, NBC)

And there are more mouths to feed than ever. Right now, Earth hosts 7.3 billion people; the most recent U.N. report indicates the population will reach 9.7 billion by 2050. By then, global demand for food could be 60 percent higher than it was a decade ago.

The GFS researchers say more agricultural innovation and market transparency is needed to minimize the impacts of shortages going forward. But actually getting it done is up to the stakeholders.

You can read the full report on the GFS website.

This video includes images from Sascha Elmers / CC BY 3.0 and music by Yinyues / CC BY 3.0.