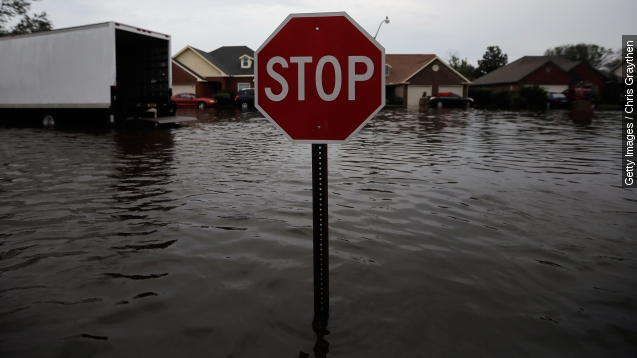 A new study published in the journal Nature Climate Change has scientists freaking out about the future of tropical storms, in a bad way. And maybe they shouldn’t be the only ones.

Grey Swans are “high-impact storms” that may be predicted by using historical and physical data. The study looked at the climate data from three cities: Tampa, FL; Cairns, Australia; and Dubai, United Arab Emirates.

Kerry Emanuel, co-author and professor of atmospheric science at MIT told MIT News,“These are all locations where either no one’s anticipated a hurricane at all, such as in the Persian Gulf, or they’re simply not aware of the magnitude of disaster that could occur.”

Now, most of the concern lies in the amount of water a Grey Swan storm can push to shore with its winds, also known as storm surges.

For example, the simulations predicted Tampa could see 20-foot storm surges as early as today and 36-foot surges by the end of this century. Which means most of Florida’s southern tip would be engulfed by water — meaning another possible Katrina-level disaster, or worse.

But before you start frantically calling some relatives, the researchers make it clear that these events are pretty unlikely. These are worst-possible-scenario situations. So, the question is, should we prepare?

And considering the study predicts the likelihood of a storm surge of that magnitude hitting Tampa may increase from 1 in 10,000 to 1 in 700 by the end of the century due to continued climate change, policy makers are the ones who should be panicking. Again, remember Katrina?

And since climate change has a gray history in Washington D.C. …

“I’m not qualified to debate the science over climate change,” said John Boehner, Speaker of the House of Representatives.

“I’m not a scientist,” said Rick Scott, Governor of Florida.

It will be challenging to pass laws that prevent climate change. But at least we have the opportunity to prepare for these worst-case scenarios.

Lin said, “[We must] consider extremes that are beyond the history and prepare for these extremes.”

This video includes images from Getty Images and music from Chris Zabriskie / CC By 4.0.