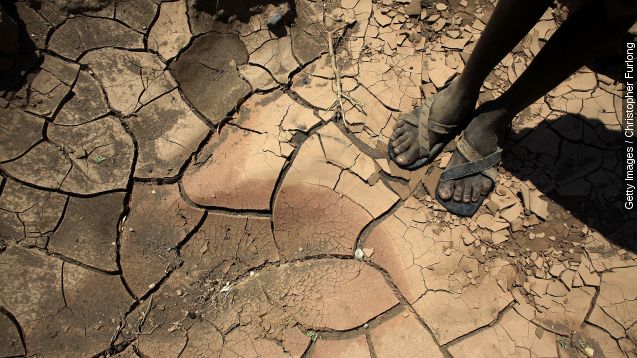 SMS
Climate Change Could Force 100 Million More Into Poverty
By Katie Link
By Katie Link
November 8, 2015
A new report from the World Bank predicts 100 million more people will be living below the poverty line by 2030 due to impacts of climate change.
SHOW TRANSCRIPT

According to the World Bank, there are 702 million people living in poverty today. And because of climate change, that number could jump by 100 million by 2030.

The World Bank released a new report Sunday warning if the world doesn't act on climate change, it will be impossible to eradicate poverty.

The report looked at how climate change could affect people with limited resources by analyzing the impact of climate change on agriculture and ecosystems, natural disasters and global health issues.

According to the report, climate change could "result in global crop yield losses as large as 5 percent in 2030." Less available food means higher prices for what is available. (Video via Intergovernmental Panel on Climate Change)

And higher food prices hit poor people the hardest, because they spend a higher percent of their budget on food. The World Bank says back in 2008, a spike in food prices sent 100 million people below the poverty line. (Video via World Bank)

Climate change can also cause extreme weather, which has a more devastating impact on the poor. The report says there could be heat waves, droughts and floods.

And climate change will likely greatly impact the spread of diseases. The report's authors fear warmer temperatures could lead to more cases of malaria and diarrhea, for instance. (Video via World Health Organization)

Warnings like this one from the World Bank aren't new. Last year, a U.N. panel warned that the effects of climate change can already be felt on every continent. (Video via Intergovernmental Panel on Climate Change)

That panel's report analyzed how global warming might impact food supplies over time. The report concluded that unless change is made, the poorest nations are in big trouble. (Video via NASA)

World governments will continue the discussion on how to cut back on greenhouse emissions at climate change talks in Paris at the end of the month.