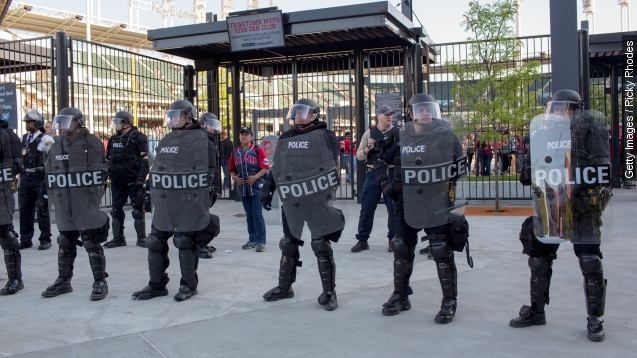 SMS
Cleveland Policing Reforms Could Be 'National Model'
By Kate Grumke
By Kate Grumke
May 26, 2015
Cleveland's agreement for policing reforms could be a "road map" for police departments across the country.
SHOW TRANSCRIPT

Now federal and city officials have reached an agreement on some of the strictest police reforms in the nation, potentially setting a bar for departments across the country.

"To announce what I agree is a historic agreement that will transform the way the city of Cleveland is policed for years and years to come," said U.S. Attorney Steven Dettelbach of the Northern District of Ohio.

The deal calls for more training and accountability for police, which lines up with demands of protesters Saturday who were angry after a judge found a Cleveland police officer not guilty of manslaughter in the shooting of two unarmed suspects in 2012.

The new agreement comes at a time when police departments across the nation are considering reforms to address excessive force.

"We have signed and are filing a 105-page, comprehensive consent decree that, once approved, will not only serve as a road map for reform in Cleveland but as a national model for any police department ready to escort a great city to the forefront of the 21st century," Dettelbach said.

Some of the changes for Cleveland include restrictions on the use of lethal force and training to better de-escalate situations. The police department will also be required to keep better records about police stops and use of force.

The lack of comprehensive statistics nationally on such issues is something the Obama administration said it wants to change. Cleveland will have an independent monitor to make sure the reforms are carried out.

These are the types of reforms being considered nationally.

The Justice Department has opened more than a dozen investigations into police departments under the Obama administration and has reached similar deals in cities like New Orleans, Seattle and Detroit.

Justice Department and Cleveland officials are now presenting the agreement to a federal judge for approval.