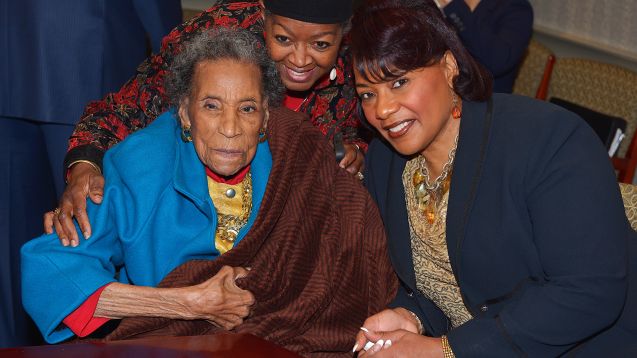 A key civil rights activist and organizer in the 1965 Selma marches died Wednesday.

Amelia Boynton Robinson died after being hospitalized for a massive stroke last month. She was 104 years old.

Concidentally, Boynton Robinson died on the same day that ratification was certified — only 95 years later.

She was known as one of the survivors of "Bloody Sunday," where civil rights protesters were beaten by police in Selma, Alabama in 1965. That event is known as one of the most violent instances of police brutality during a protest in American history. Boynton Robinson was beaten to the point of unconsciousness while marching.

"I didn't know how many people were beating me. But, somehow, there was a determination in me that said, 'I'm gonna keep on. I'm gonna fight more than I ever had,'" Boynton Robinson said in a StoryCorps interview aired on WABE.

"[The experience] made me more determined to do everything I could to make African Americans first-class citizens and to destroy the fear that is in our people," Boynton Robinson said.

Boynton Robinson commemorated the 50th anniversary of that day with President Obama, lawmakers and other civil rights leaders earlier this year. (Video via The White House)

"She has this message for anyone who says they stand on her shoulders," said a CBS anchor. "Get the heck off of my shoulder and get to work," Boynton Robinson said.