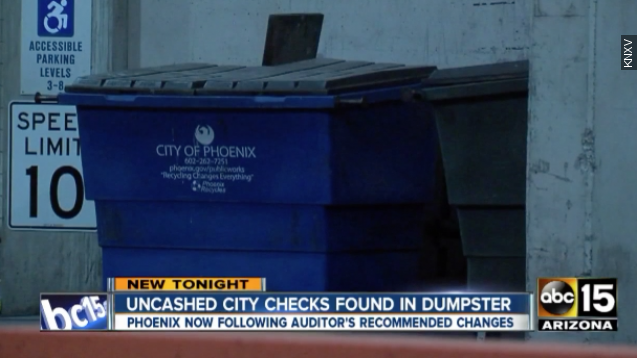 SMS
City Threw Away Uncashed Checks Totaling More Than $90,000
By Becca Dunn
By Becca Dunn
July 31, 2015
An auditor was unable to figure out how 15 uncashed checks made out to the City of Phoenix ended up in a dumpster.
SHOW TRANSCRIPT

In June, a man came across a stack of uncashed checks in a City of Phoenix parking garage dumpster.

These findings didn't sit well with one Phoenix taxpayer.

"I pay taxes, which means some of my taxes are in here," said David Zorehkey, the man who found the checks in June.

The city auditor wasn't able to figure out how the documents got there. And although the city says all of the money has been accounted for, one city council member says the investigation wasn't enough.

"They didn't really look deep into it, they didn't look into the video cameras. ... Basically, the report said nothing and it's incredibly disappointing," said Phoenix City Councilman Sal DiCiccio.

All the checks were written in December 2014 or January 2015. The city believes this was an isolated incident and says it's taken steps to make sure it doesn't happen again.