There Might Be A Giant Snake On The Loose In Maine 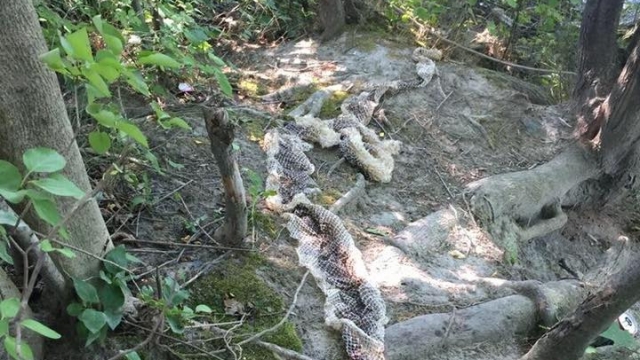 SMS
There Might Be A Giant Snake On The Loose In Maine
By Ryan Biek
By Ryan Biek
August 22, 2016
There have been glimpses, and skepticism, of a giant snake in Maine called Wessie.
SHOW TRANSCRIPT

Police in Maine were recently tipped off about a shed snake skin said to be the length of a truck. It's just the latest chapter in the mystery of Wessie.

So far, glimpses of the snake with a head the size of a softball have been sporadic. Wessie was reportedly first spotted near a playground in June.

SEE MORE: This Gator Swam Around With A Python In Its Mouth, Because Florida

Days later, local police posted this. This seems to be a stock image, but the post said an officer saw a large snake eating what may have been a beaver. A second officer came to the scene and the pair estimated the snake was 10 feet long.

A biologist with the Department of Inland Fisheries and Wildlife said the snake had to have come from somewhere other than Maine, as no native species could eat a beaver. His guess was that Wessie is a Burmese python and was once someone's pet.

Since then, Wessie has gotten its own social media pages and even a beer named after it.

But there have been no other reports of Wessie spottings until now, with the shed skin. Yet, some experts are skeptical of that, too.

One reptile expert said it's pretty improbable to have a skin laid out like that naturally and suspected a human did it.

The mystery will have to be solved quickly, though. If Wessie is real, and is a Burmese python, it's unlikely to survive Maine's winter.