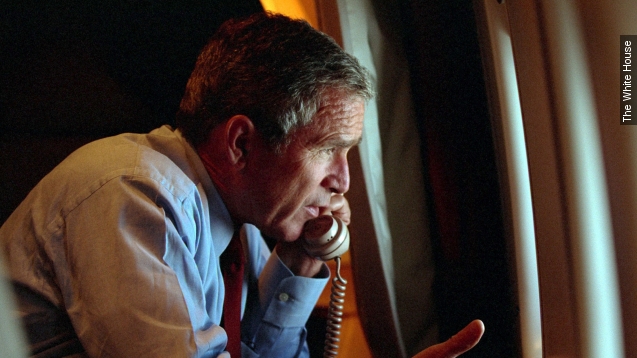 Former officials from the George W. Bush administration imply the president was seriously warned of terrorist attacks even earlier than originally thought.

The revelations stem from an upcoming Showtime documentary, "The Spymasters," about the CIA that airs at the end of November. (Video via Showtime / 'The Spymasters')

"The United States was going to be struck. Struck hard and Americans were going to die. This country's got to go on a war footing now," Cofer Black, former Counterterrorism Center director says in a trailer for the documentary.

The  9/11 Commission Report originally reported warnings went back as far as August 6, 2001 when President Bush was given a CIA brief titled "Bin Laden Determined to Strike in U.S." But the documentary goes two months further to a meeting on July 10.

Former CIA Director George Tenet details that meeting he had with then National Security Adviser Condoleeza Rice and a member of his staff, saying "Rich [Blee] started by saying, ‘There will be significant terrorist attacks against the United States in the coming weeks or months. The attacks will be spectacular. They may be multiple. Al Qaeda's intention is the destruction of the United States.’"

That July 10th meeting has actually been public for some time. Tenet and Rice both wrote about it in their memoirs. But this is the first time the former director has given out so much detail.

The documentary raises a question that's been buried on for years: could the Bush administration have done more to stop Osama Bin Laden from attacking the United States?

The question has been somewhat stirred up recently, during the Republican primary process, with presidential candidate Jeb Bush trying to publicly protect his brother's legacy.

"As it relates to my brother, there's one thing I know for sure, he kept us safe," Bush said in the CNN GOP debate.

This video includes images from Getty Images and The White House.