Churchill's Bust Was A Victim Of Obama's Executive Feng Shui 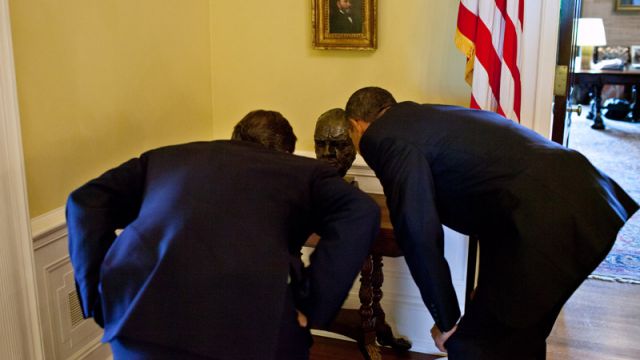 SMS
Churchill's Bust Was A Victim Of Obama's Executive Feng Shui
By Katie Link
By Katie Link
April 25, 2016
President Obama says Winston Churchill is, in fact, still in the White House — in the form of a bust outside the Treaty Room.
SHOW TRANSCRIPT

President Obama has finally given us a clue into the whereabouts of a highly debated Winston Churchill bust.

After Obama moved into the White House in 2009, a statue of the British leader allegedly went missing and accusations soared.

Those accusations resurfaced in an article written by London Mayor Boris Johnson that was published last Friday. Boris wrote, "Some said it was a snub to Britain. Some said it was a symbol of the part-Kenyan President’s ancestral dislike of the British empire."

Well, turns out, it was neither.

Obama addressed the rumors — hopefully, once and for all – at a press conference the same day the article was released.

"Now, when I was elected president of the United States, my predecessor had kept a Winston Churchill bust in the Oval Office — there are only so many tables where you can put busts otherwise it starts looking a little cluttered," Obama said.

Obama explained he replaced the bust of Churchill with one of Dr. Martin Luther King Jr. Now, a Churchill statue sits outside Obama's office on the second floor of the residence.

And just in case you were wondering, "It’s there voluntarily because I can do anything on the second floor," Obama said.