Christie vs. Huckabee On Entitlement Reform 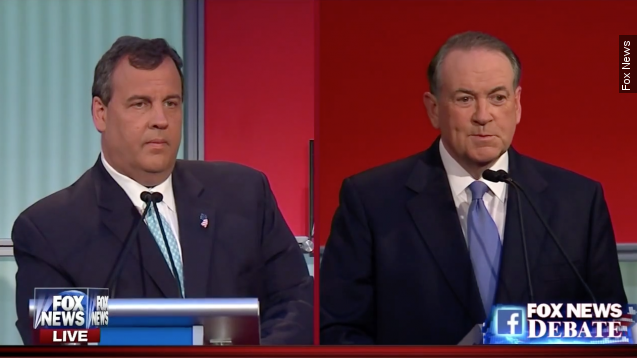 Chris Christie and Mike Huckabee went at it over entitlement reform Thursday night.

"Governor Huckabee says he can save social security and Medicare without doing any of that. Is he lying?" Chris Wallace asked Christie.

Christie wants to rein in parts of those programs, raising the age to get Social Security and making the wealthy ineligible. (Video via Fox News)

"Social security is meant to be, to make sure that no one has worked hard and played by the rules and paid into the system grows old in poverty in America," Christie said.

"The government figures they can do this off the backs of people, many of whom are poor and depend on that money," Huckabee said.

"The fundamental problem is that the system is broken," Christie said. "It has been stolen from. We have been lied to."

Then things got interesting.

"The fair tax transforms the process by which we fund by social security and Medicare ... consumption is paid by everybody, including illegals, prostitutes, pimps, drug dealers," Huckabee said before the bell rung.