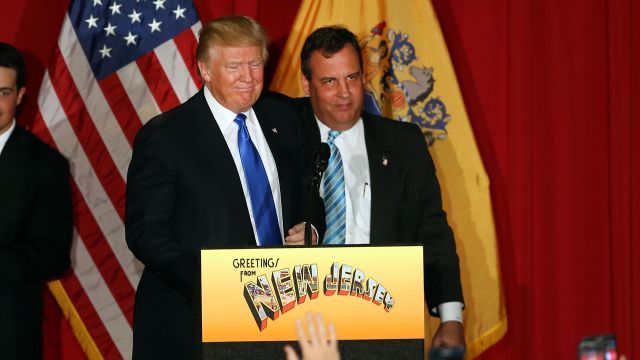 SMS
Christie's Support Of Trump May Have Been A Long Time In The Making
By Eugene Daniels
By Eugene Daniels
November 15, 2016
Despite a bitter battle during the primaries, it seems Donald Trump and Chris Christie have long promised each other support.
SHOW TRANSCRIPT

"In 2015, so you know during the beginning of the campaign, that Donald Trump told Chris Christie that he didn't think he would make it past October," CNN's Dana Bash said.

It looks like the Christie-Trump alliance has been going on a lot longer than we thought — at least according to a book by CNN that chronicles the 2016 race.

According to "Unprecedented," the president-elect wasn't expecting much success and intended to endorse Gov. Christie instead. That plan was obviously a bit premature.

But it is just another reminder that barely anyone, including Trump himself, saw 2016 ending with Trump as president — especially not last fall.

And it also helps explain Christie's endorsement of Trump back in February. It's safe to say most of the political world was surprised when Christie jumped on the Trump train after suspending his campaign.

At the time, it didn't make a whole lot of sense. Trump was an outsider, and Christie was a member of the establishment lane during the primary. And the two have known each other for years, but during the primary, things got pretty nasty at times, especially when Trump said that Christie knew his aides were going to close down a bridge as political retaliation.

Trump told a crowd at a rally: "Look, here's the story. The George Washington Bridge. He knew about it."

But since then, Christie has been one of Trump's closest advisers and defenders. However, it looks like the relationship has soured a bit lately. Christie was booted as the head of Trump's transition team amid reports that the New Jersey governor's aides were convicted during the Bridgegate scandal.