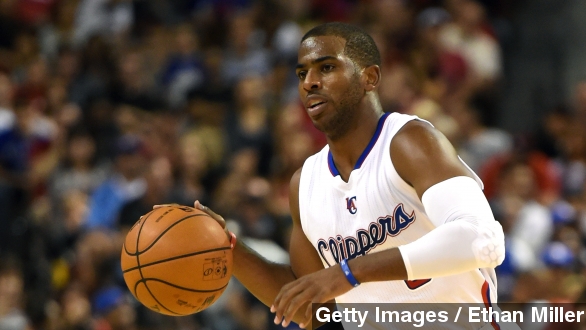 The NBA has reportedly fined L.A. Clippers guard Chris Paul $25,000 for post-game comments made Thursday about a rookie referee — who is a woman — after his team's loss to the Cleveland Cavs.

Speaking on his team's technical foul-laden third quarter — in which he received a tech from referee Lauren Holtkamp — Paul told reporters, "That tech she gave me was ridiculous. ... If that's the case, this might not be for her."

"When you wanna criticize an official, you could've just said those are bad calls. ... You didn't necessarily have to say, 'If she keeps doing that, she won't be at this long,'" ESPN writer Ramona Shelburne said.

Paul later reiterated, "Last night was about a bad call," referencing Holtkamp's tech and not the fact that she is a woman referee.

But it was his initial comments that prompted the National Basketball Referees Association's general counsel to respond calling Paul's comments "deplorable" and "unprofessional." Cue: firestorm, right?

Well, not really. While Paul's unfortunate combination of words and a response from the NBRA has been called a controversy, the league's punishment is typical for criticizing any referee and the majority of strong reactions have been from people defending Paul and his character.

One of those people is NBA Players Association Executive Director Michele Roberts. In her statement backing Paul, Roberts says the Clippers guard was critical in making her the first woman to serve in her role. (Video via Washington Business Journal)

And San Antonio Spurs assistant coach and former WNBA star Becky Hammon tweeted, "Chris Paul @CP3 is a competitor & he had an opinion, I don't think it had anything to do with the refs gender."

Of course, two women with jobs related to the NBA don't exactly clear Paul of being sexist, but one writer says this particular dust-up over Holtkamp being a woman in a male-dominated profession was a non-issue from the start.

Danielle Greenberg for SB Nation wrote, "Women, especially women in traditionally male fields, are strong and capable. ... They can handle themselves, and they have earned the right to be treated like everyone else."

Holtkamp is one of two female referees in the NBA and only the third full-time female NBA ref ever.