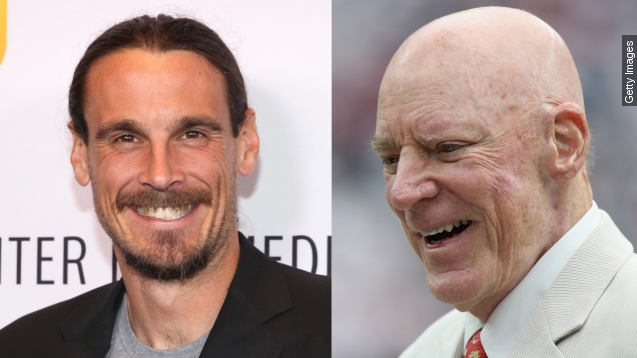 Kluwe teed off against Houston Texans owner Bob McNair in a terse editorial after McNair donated $10,000 to a group opposing HERO. That ordinance seeks to protect Houstonians from discrimination on the basis of 15 characteristics, including gender identity.

In the editorial, Kluwe calls McNair "tone-deaf" — among other things — for being an NFL owner and donating to a group that doesn't exactly uphold the NFL's values of "tolerance and inclusiveness."

Campaign for Houston, HERO's opposition, has honed in on gender identity and used this arresting image in its ad.

"Proposition 1: Houston's 'Bathroom Ordinance.' What does it meant to you? Any man at any time could enter a woman's bathroom simply by claiming to be a woman that day," a narrator says in a Campaign for Houston ad.

Despite Houston being the biggest U.S. city to elect an openly gay mayor, Annise Parker, HERO has faced some serious opposition — even from other former athletes. (Video via MSNBC)

But if there's one thing Kluwe knows how to do, it's how to get attention. In 2014, Kluwe claimed he was "pretty confident" he was cut from the Minnesota Vikings for his same-sex activism. The Vikings immediately released a statement saying they were looking into Kluwe's allegations. (Video via TBS / "Conan")

Due to legal challenges to HERO, the Texas Supreme Court suspended the ordinance, but the Houston City Council decided to put it on an upcoming ballot. Houston residents will get a chance to have their say on HERO Nov. 3.