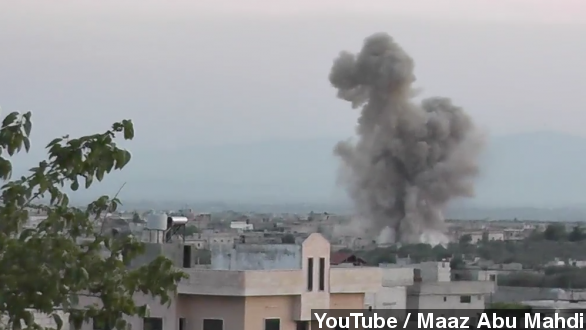 Three young children, their mother, father and grandmother died Monday night, hiding in their basement from what activists say was a chlorine bomb attack on their neighborhood in northwest Syria. (Video via Sarmine Coordination Committee, Step News Agency)

Those activists are blaming the regime of Bashar Al-Assad. The regime denies responsibility, and, as it often does, is blaming the rebels. (Video via Syrian Presidency)

The allegations come just days after the United Nations Security Council condemned the use of chlorine as a weapon in Syria's civil war.

It's believed sarin gas was fired from rockets in this deadly chemical weapons strike on the outskirts of Damascus. That attack in August 2013 left over 1,400 dead and is widely blamed on the government, which Assad denies. (Video via City of Erbin Media Office)

Chlorine is nowhere near as deadly as sarin, but it is easier to obtain because of its use in fertilizers, insecticides and water purification. (Video via YouTube / Maaz Abu Mahdi)

Its use as a weapon dates back to World War I.

The Germans were the first to use large-scale chlorine attacks, deploying the poisonous gas via artillery shells. (Video via U.S. National Archives)

Depending on its concentration, just a few breaths of chlorine can be lethal.

If inhaled, chlorine reacts with water to form hydrochloric acid in the lungs. Symptoms of chlorine poisoning range from burning sensations in the eyes, nose and throat, to nausea, dizziness and vomiting. A person's lungs can also fill with water.

The town of Kafr Zita in northwestern Syria is all too familiar with these symptoms. You can actually see what appears to be a green cloud of chlorine fill the streets in this unverified video put out by Syrian opposition activists. (Video via Syrian Revolution General Commission)

Assad denies using chlorine, but there does appear to be circumstantial evidence linking his regime to many of these attacks.

Independent munitions researcher Eliot Higgins, also known as Brown Moses, points to this chlorine gas canister found in Kafr Zita. On it, is the name of a Chinese weapons producer that's supplied to the Syrian government in the past.

But the most compelling evidence comes from The Organization for the Prohibition of Chemical Weapons, which won a Nobel Peace Prize for its efforts to rid Syria of chemical weapons. (Video via Kafr Zita)

The report didn't assign blame, but it hardly needed to.

Unlike the various rebel groups, only the Syrian government has an arsenal of helicopters and other aircraft. (Video via YouTube / Darya Revolution)

Given the allegations, you might be surprised to see Syria listed as a signatory on the Chemical Weapons Convention, under which member countries agree not to use chemical weapons.

Syria's 2013 signature was seen as a way of getting the U.S. to back off airstrikes. President Assad also vowed to surrender his country's entire chemical arsenal, which he initially denied ever having. (Video via Syrian Presidency)

Because of its industrial uses, chlorine gas was not among the chemicals the regime was ordered to turn over.